Having been handed a anti-social behaviour order (Asbo), David Camp, of Cambridge, England, has been banned from going near Islamic buildings in east London for a period of 12 months after posting racist messages on Twitter.

Using the hashtag #hijabuppropet (hijab outcry) a number of women across Sweden published pictures of themselves on Twitter and other social media websites on Monday wearing headscarves.

They did so in solidarity with a pregnant woman wearing a headscarf who was harassed and assaulted in a Stockholm suburb last weekend. The woman believes her faith was the reason for the assault, during which her headscarf was pulled off. The attacker also shouted racist taunts. 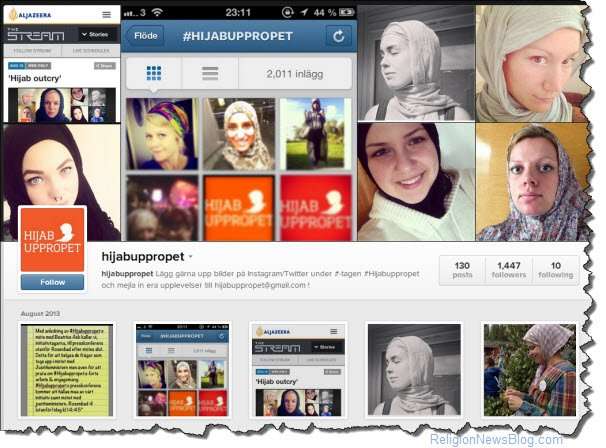 Well-known interfaith organizations such as the Interfaith Conference of Metropolitan Washington, the National Council of Churches, and the Parliament of the World’s Religions have been laying off staff members as revenues shrink.

But some experts see positive developments as well:

Authorities have issues an arrest warrant for Matt Pitt, Founder and Pastor of The Basement Ministry — a youth outreach in Birmingham, Alabama.

Pitt faces jail time after being arrested a second time on charges of trying to impersonate a police officer.

The Basement is one of the largest youth ministries in the USA.

The women allege that Schwartz brainwashed them into believing they were members of satanic cults.

Schwartz stepped down last May from his position as the Center’s Director.

According to a local NBC affiliate, exorcisms are gaining popularity in the San Francisco Bay Area.

The station doesn’t really offer any proof, but it did “take a look at two Bay Area Exorcists.” One of them is Father Gary Thomas, the official exorcist for the Diocese of San Jose.

Thomas is one of about 14 Vatican-certified exorcists working in the U.S. and the real-life counterpart to the character played by Colin O’Donoghue (not, as NBC says, Anthony Hopkins) in the 2011 thriller “The Rite.”

The station quotes Thomas as saying that the number of exorcists has quadrupled since the movie came out.

A court in Iran has sentenced a Christian convert to 10 years in prison for “endangering state security” and “conspiracy.”

His crime? Mohammad Hadi Bordba distributed copies of the bible in the Islamic Republic after he converted to Christianity from Islam.

A Utah judge has extended the deadline to apply for a board of trustees being formed to take over the United Effort Plan — a state-run trust that once belonged to the Fundamentalist Church of Jesus Christ of Latter Day Saints (FLDS), polygamous sect of Mormonism.

An increasing number of young converts to Islam are traveling from France on a mission to engage in ‘holy war‘ in Syria.

Like other European countries France is threatening to jail those who do so (and/or those who recruit them).

The father or two converts has given an exclusive interview to the BBC claiming his sons were brainwashed.

How do people forgive a crime like murder? In May, 1985, Bill Pelke’s 78-year-old grandmother was stabbed to death by four teenage girls who then ransacked her house.

Ringleader Paula Cooper was sentenced to death on 11 July 1986, and Pelke thought that was an appropriate sentence. But 18 months after his grandmother’s death he started to reconsider.

He became increasingly convinced that his grandmother – a devout Christian – would have felt love and compassion for Cooper and would have wanted someone in the family to feel the same.

Though his family members struggled to accept it, he says his decision to forgive brought him “tremendous healing”. [See: The Healing Power of Forgiveness]

Cooper was released in June, her sentence having been set aside due to her good behavior in prison. Not only had Pelke actively campaigned for her release, but he now wants to help her adjust to life outside.