Director of treatment center steps down after brainwashing allegations

Pastor reportedly sends ‘goblins’ to former member of his church.

A jury in Enumclaw, Washington, has found Malcolm John Fraser — a pastor at Sound Doctrine Church — guilty of sex crimes committed against a young girl.

The jury found Fraser guilty on all counts.

He was taken into custody immediately after the verdict was read.

A sentencing date had not yet been set.

Theologically Sound Doctrine Church is a cult of Christianity.

Sociologically there are concerns about the group as well.

A psychologist sued by four women for allegedly brainwashing them at a treatment center for eating disorders has stepped down from his position as the center’s director.

Since 2011, four women have filed separate lawsuits against the treatment center and psychologist Mark Schwartz.

The women allege that Schwartz brainwashed them into believing they were members of satanic cults.

They also claim Schwartz implanted them with false memories of sexual abuse.

Schwartz, who founded the inpatient Castlewood Treatment Center in St. Louis, MO, twelve years ago, is scheduled to give a deposition in late July.

According to the St. Louis Post-Dispatch a spokesman for Castlewood has called the claims “spurious” and has said the center will “defend this case vigorously.”

The city is home to the European headquarters of the destructive Scientology cult.

FECRIS is an umbrella organisation for European family support groups whose members help the families and friends of cult members.

“These organisations wreck lives to an extent that normally would lead governments to take some action,” Sackville said. “But by posing as religions, they succeed in convincing civil servants and politicians to back off and fail to take a principled stand.”

Sackville was particularly critical of the Danish government for allowing the Church of Scientology, which was started by the science-fiction writer L. Ron Hubbard in 1952,Â to establish its European headquarters in Copenhagen.

The organisation is known for its controversial practices that include urging its members to “disconnect” from friends and family who are not members.

Copenhagen is also the location for Scientology’s Rehabilitation Project Force (RPF) where members that have deviated from the cult’s teachings are sent. Critics allege that the RPF functions as a labor camp and private prison.

The cult has several of these camps around the world.

Former IT Specialist Claims To Be Jesus Reborn

From our ‘Religious Insanity’ files: Former IT specialist Alan John Miller heads a religious cult named ‘Divine Truth‘ from Wilkesdale, near the small town of Kingaroy in the state of Queensland, Australia.

He wants people to believe that he is Jesus Christ.

Moreover, his partner, Mary Suzanne Luck, is supposed to be Mary Magdalene.

“I have very clear memories of the crucifixion, but it wasn’t as harrowing for me as it was for others like Mary who was present.

“When you are one with God you are not in a state of fear, and you have quite good control over your body’s sensations and the level of pain that you absorb from your body.”

The networks says the whilst critics dismiss his claims, Miller’s seminars attract large groups of people, up to 150 a time.

Cult experts in Australia and beyond are concerned, as some of Miller’s followers reportedly have given up careers and families in order to join the religious nut.

Do we even need to point out that Miller’s group is, theologically, a cult of Christianity?

One buyer beware regarding this video: If you ever need a cult expert, make sure you check this information first.

Cult leader Warren Jeffs continues to use his prison sentence to sharpen his creative writing skills.

Jeffs heads the Fundamentalist Church of Jesus Christ of Latter Day Saints (FLDS), which is theologically a cult of Mormonism.

In August, 2011, he was sentenced to life in prison for sexually assaulting two underage followers he took as brides in what his church deemed “spiritual marriages.”

Ever since, the cult leader — who even from behind prison bars continues to rule the polygamous cult with an iron fist — has sent out a series of silly ‘revelations’ and ‘prophecies,’ which he claims were given to him by ‘Jesus Christ, Jehovah Son Ahman.’

‘Son Ahman’ is one of the names of the Mormon version of Jesus Christ.

Most of the alleged revelations amount to doomsday predictions and other warning of dire consequences should Jeffs not be released from prison.

Jeffs’ most recent bit of nonsense includes the threat, “I shall cause Mount Olympus to fall on Salt Lake City.”

A woman in Bulawayo, Zimbabwe, claims that her former pastor — upset with her for leaving his church for another one — is sending her goblins which steal her g-string panties and whisper insults. 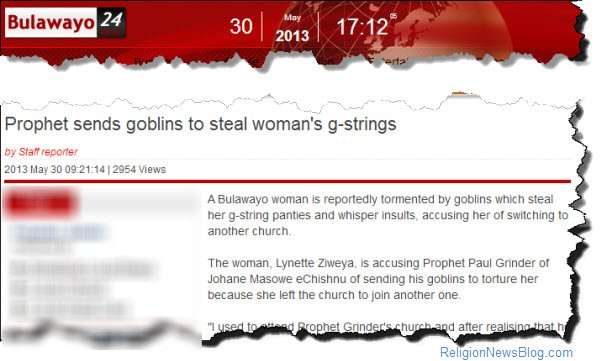