One of three women charged in connection with the murders of two fellow cult members, 28-year-old Antoinetta McKoy and 4-year-old Jadon Higganbothan, reportedly is considering a plea bargain.

July 2011 report on the cult killings.

The DA’s office has not confirmed that a plea bargin is in the works.

Another woman, LaRhonda Renee Smith, was sentenced to 23.3 – 30 years in prison after accepting a plea deal.

Last June Peter Moses, leader of the Black Hebrews-related cult, pleaded guilty to killing the woman and the boy.

The woman was killed because she wanted to leave the cult.

Reportedly Moses will be sentences after the cases against the other defendants are resolved. Under the terms of his plea arrangement he will not face the death penalty, but instead will likely receive two life sentences without parole.


Authorities initially charged 7 people in the murders — including Moses’ sister, Sheila Moses and his mother, Sheilda Harris, both of whom were cleared of all charges and walked free.

Police in Cameroon have rescued 30 children from a religious sect which had kept them in seclusion since 2001. 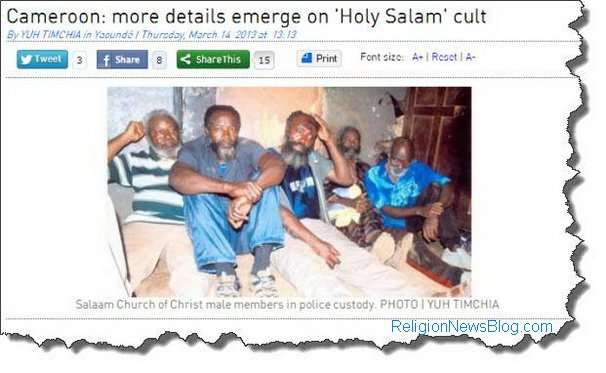 Eight male members of the sect, headed by a self-declared evangelist, married and shared about eight women with whom they reportedly fathered the undeclared kids aged between 2 weeks and 9 years with.

The children, who don’t attend school, never stepped out of the compound even for medical care and some of the women were co-wives with some of their daughters.

Police say the sect, the Salam Church of Christ, was discovered after one of its sick male members died.

Headed by self-proclaimed evangelist Richard Taah the sect, which does not believe in seeking medical treatment, then tried to bury the deceased man in secret.

In a separate report the site says “the governor of Cameroon’s Northwest Region has ordered houses of worship illegally operating in his area of jurisdiction to immediately close their doors.”

The Salam Church of Christ is among thousands of mostly charismatic churches that operate freely in Cameroon even though only 46 are legally registered.

Police suspect some of the children could have been victims of human trafficking. Some locals have reported children missing.

Authorities have also discovered ‘about five’ graves in the church’s backyard.

Neighbors say the men, riding in luxury cars with tinted windows, did all the shopping while the women and children stayed locked away from the public.