You are here: Home | Applied Scholastics | Scientology worms its way into schools

But upon reviewing the material DeAnna Rowe, executive director of the Arizona State Board for Charter Schools, says she sees no problem.

“Overall it appears to promote the need to respect another’s religious beliefs,” Rowe wrote in an email.

The Scientology cult uses various front groups in its attempts to both market its views and gain respectability.

One such groups, Applied Scholastics, promotes the use of study techniques created by L. Ron Hubbard, the fantasist who created Scientology, and whose ludicrous medical claims form the basis of treatments at Narconon — another of the cults’ fronts.

As we note at Apologetics Index, there are three major criticisms of Applied Scholastics.

Arizona radio KJZZ reports that teachers at the school were also encouraged to distribute booklets called, “The Way to Happiness.”

The booklet consists of a compilation of widely agreed upon moral values that Hubbard put into writing (and many which he didn’t follow too closely).

According to the Los Angeles Times, in an article titled, Scientology and the Schools,

Scientology publications have called the [Way to Happiness] campaign “the largest dissemination project in Scientology history” and “the bridge between broad society and Scientology.”

Meanwhile, its should be noted that Scientology’s own ‘moral values’ leave a lot to be desired — given that it has frequently put Hubbard’s encouragement of unethical behavior into practice.

On Friday, Feb. 25, 2011, Montreal TV network TVA broadcast a hidden-camera investigation into Scientology — the result of 4 months of research. The exposé was broadcast in a program called JE (Journalisme d’enquÃªte = “Investigative Journalism”), which is dicated to exposings scams and injustices.

Scientology’s front groups were addressed as well, including Applied Scholastics:

What do American Catholics Want?

A graphic by the Public Religion Research Institute (PRRI), “shows that majorities of Catholics — including those who attend church most frequently — believe that in its statements about public policy, the Church should focus more on social justice issues, rather than abortion and the right to life.” 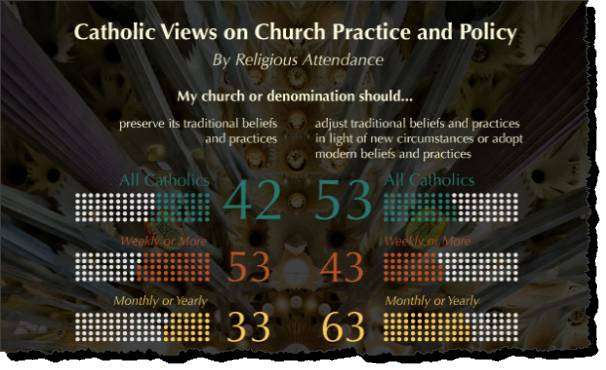 Robert P. Jones, CEO of PRRI, in his Washington Post column looks at the shifts and tensions among American Catholics, at look which provides a “microcosm into the larger global dynamics at play:”

What you want to know about the Pope’s retirement