You are here: Home | anti-psychiatry | Ex-Scientologist: I would have killed for Scientology

I’d have killed for Cruise cult

A top Scientologist who escaped the cult has given the most explosive insight yet into the shady “celebrity religion”.

A-list followers including Tom Cruise, Kirstie Alley and John Travolta believe their faith is the secret of their success.

But for John Duignan it cost him everything and everyone he held dear after he become a leading figure in the church’s British branch.

John says he was so brainwashed that he would have killed for Scientology. 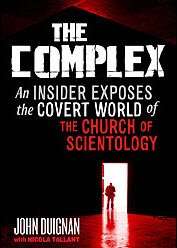 And he claims another member was driven to a suicide bid when she was “rehabilitated” after trying to leave.

John tells of his nightmare in his book.

His hell began in 1985 when he was approached in the street by a pretty girl who offered him a free personality test.

John — who had never heard of Scientology — was 22 and living in Stuttgart with his German girlfriend but their relationship was on the rocks. Depressed and lonely, he accepted.
[…]

In the following weeks, John was grounded in the Scientology doctrine.
[…]

Under a regime of sleep deprivation, brainwashing and so-called counselling, John gave up his mind to the bizarre teachings.
[…]

John Duignan being interviewed about his experiences within the cult of Scientology on the Marion Finucan show on RTE radio 1. Part 1/3 · 2/3 · 3/3

He says: “I saw myself as a soldier for Scientology. I believed it was the only route out of oblivion for mankind.

“The doctrine teaches a human’s body doesn’t matter because it is the Thetan, or soul, which survives.

“If I’d been told someone had to be eliminated because they were a threat to Scientology I could have justified the killing. They’d just lose their body, which isn’t needed.”

When it was suggested John might train to become a church staff member, he jumped at the chance.
[…]

John persevered, and three months after his personality test he received a call from Scientology Missions International in Los Angeles.

They wanted him to join the church’s 3,000-strong elite core, Sea Org, which oversees recruitment and its other big international interests.
[…]

But when John arrived at the cult’s headquarters in LA, conditions were not what he’d imagined.

He says: “We were expected to work, eat and sleep Scientology with every minute of the day scheduled, from 7am until lights out at 11pm.”

The harsh conditions John endured were in stark contrast to the luxury enjoyed by stars at the glittering Scientology Celebrity Centre down the road.
[…]

Here he spent almost two decades devoting his life to the cult — until a bizarre encounter with Scientology poster boy Tom Cruise made John begin to question his faith.

He says: “In 2004 Tom was welcomed to the annual International Association Of Scientologists Gala Ball as the Most Dedicated follower.

“I was working in the grounds and Tom came out wearing a bad fake beard. It was pathetic.

“Scientologists look upon Tom Cruise as one of their best assets, but it was him who made me think twice about the cult.

“I was earning £15 a week, doing my best to spread the word. I had no privacy or time to relax and was afraid or stressed all the time.

“Yet I wasn’t as dedicated as Cruise? It hurt.”

He says he knew he would be hunted by the sect’s intelligence wing, the Office of Special Affairs (OSA).

John says: “Members who try to leave Scientology are subjected to the Rehabilitation Project Force.

“This uses military tactics and are feared. A friend, Alice, was put through rehabilitation. At 19 she was subjected to daily interrogations for six months.

“One afternoon Alice swallowed a tin of paint thinner and jumped from a 15ft roof.

“The whole thing was hushed up. Alice is now crippled.”
[…]