Remember Ergun Caner? He’s a Baptist minister who tours the U.S. to talk about his conversion from Islam to Christianity. 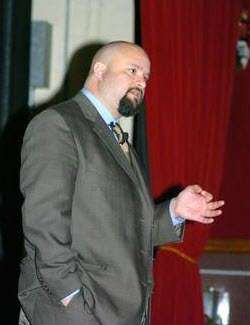 Caner — erstwhile known as E. Michael Caner, and three-and-a-half years after Sept. 11, 2001 as Ergun Mehmet Caner — has been fighting allegations that he fabricated or embellished facts about his past.

Bloggers, both Christian and Muslim, have been chipping away at his story, producing video and audio evidence of Caner apparently contradicting himself.

Caner has sued two bloggers for posting video of him lying to the US Marines.

One suit, against Jason Smathers, was dismissed. Another, which targeted Jonathan Autry, resulted in a summary judgement in favor of the blogger — with Judge Moon calling Caner’s claims “ludicrous” and “outlandish.”

Caner’s most outrageous claims in his speech to the U.S. Marines are shown in this abbreviated video, which Jason Smathers describes as “one of two training sessions given by the pretend jihadist, Ergun Caner, to the US Marines at Marine Corps Air Station New River in April of 2005.” The full presentation is available here.

Television viewers in England have taken ITV to task for airing a 30-second Scientology commercial that touts the destructive cult‘s so-called “spiritual technology.”

“Imagine science and religion connecting,” says a voiceover in the ad, which was shown during prime time in the break between ‘Emmerdale’ and ‘Coronation Street’. “Imagine technology and spirituality combining. Now imagine that everything you ever imagined is possible,” the advertisement continued, ending with Scientology‘s website address.

Based on the nutty ideas of founder L. Ron Hubbard, a man who consistently lied about his life and accomplishments, Scientology has nothing do with science or technology, and very little with spirituality.

The Advertising Standard Authority (ADA) received 24 complaints from viewers fearing the ad preys on vulnerable people. However, the ADA says “The Advertising Code does not prohibit ads for religious organisations from being broadcast on channels.”

Scientology was recognized as ‘religion’ in the UK last December, when a couple won the right to get married at a Scientology org.

The chairman of the Orthodox Church’s information agency told Interfax that Wurst’s win was “yet one more step in the rejection of the Christian identity of European culture”.

“A group of humanists wanted to eliminate ‘under god’ from the Pledge of Allegiance. They lost in the most interesting way,” Andrew Brown blogs at The Guardian.

A Muslim man in Manchester, UK, killed his wife and buried her body at the side of a roadside rest area after believing she had become possessed by an evil spirit, a court heard Wednesday.

The prosecution alleges that Ahmed al-Khatib, 34, killed the mother of three because she had become “too westernized.”

Latinos in the U.S. have a strong belief in the spirit world, Pew Research Center says:

In our survey, about one-in-eight Hispanic Catholics in the U.S. (12%) said they have witnessed an exorcism. Even more Hispanic Protestants (37%) — including 59% of Pentecostals — said they have seen “the devil or evil spirits being driven out of a person.”

Varying percentages of U.S. Hispanics also hold other spiritual beliefs, which in some cases may reflect a mix of Christian and indigenous or Afro-Caribbean influences.

The Scientology cult is difficult to leave. Actress and former Scientologist Roslyn Cohn explain why in this feature-length presentation:

Religion News Briefs consists of a collection of links and blurbs highlighting religion news, cult stories — and anything else we think you might like.

You may encounter offbeat stories, links to religion-related resources, and a dash or two of personal opinion.

Follow us on Twitter (and yes, we know we’ve got a copy-cat there. It’s par for the course. Which reminds us, if you need a cult expert, check this first), Google+, RSS, or email.

Want to alert us to a news item? Contact us.