The Texas Sixth Court of Appeals in Texarkana on Friday affirmed the Capital murder conviction of Jessica Bain Carson for the murder of her 13-month old daughter, Amora Bain Carson. 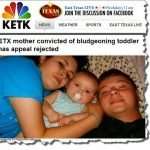 In May last year the court also upheld the conviction of Blaine Keith Milam, Carson’s live-in fiancÃ©, for torturing and killing the baby in what the couple claimed was an exorcism.

During Milam’s trial forensic pathologist Keith Pinckard testified that the baby had 18 breaks in her ribs and at least 24 human bite wounds covering her body.

Pinckard also testified it appeared Amora Bain Carson “had been strangled as well as having suffered multiple skull fractures, brain injuries, a torn liver, her arms and legs had been twisted to the point of breaking, her retinas detached and internal injuries from apparently being sexually assaulted with an object authorities believe was a pipe wrench.”

Milam was sentenced to death, while Jessica Bain Carson received a sentence of life in prison.

Leaving and Recovering from Cultic Groups and Relationships: A Seminar for Families and Former Members.

This is an event organized by the International Cultic Studies Association (ICSA).

After several years of excellent coverage of polygamy in Utah, Salt Lake Tribune reporter Lindsay Whitehurst has a new beat covering higher education for the paper.

Taking her place at the helm of The Polygamy Blog are reporter Jim Dalrymple II (Twitter: @jimmycdii) and photographer Trent Nelson (Twitter: @trenthead).

The paper says they’ll be reporting on and photographing all facets of polygamy in Utah — “from the FLDS in Hildale and the Brown family of “Sister Wives” as they challenge the bigamy statute in federal court, to the hundreds, perhaps thousands, of polygamous families that live throughout Utah with their own stories to tell.

“They’ll also give a voice to polygamy opponents and people who say they were victimized through polygamy or by leaders of polygamous communities.”

Will Scientology tell-all book be published in Canada?

The U.S. publisher of Going Clear: Scientology, Hollywood, and the Prison of Belief, Lawrence Wright’s in-depth look into Scientology, also holds the Canadian rights to the book.

But the book won’t be available there until Knopf U.S. has finished a review of Canada’s libel laws and the book’s chances of being dragged into lengthy and expensive litigation by the Church of Scientology, says a spokesman for New York-based publisher.

The laws severely curtail free speech. Greg Quill, books columnist for the Toronto Star, writes, “If the Church of Scientology is going to make a legal strike against Going Clear, it will likely be in Canada, because our libel laws are more favorable to alleged victims of defamation, book industry insiders say.

The Scientology organization is notorious for its litigious nature. The cult’s founder, L. Ron Hubbard, taught that the purpose of a lawsuit is to harass rather than to win.

Quill says the book has also been withheld in Britain, whose libel laws are even tougher on publishers than Canada’s.

Scientology has denounced the book as fallacious and factually deficient, but the New York Times points out the Pulitzer Price winning author Lawrence Wright is known for his thoroughness in research and fact checking.

The State of Oregon is investigating whether a baker who refused to bake a wedding cake for a lesbian couple in doing so has broken the State’s Equality Act of 2007.

Sweet Cakes owner Aaron Klein told the women they “were abominations to the Lord,” and explained that his religious beliefs prevented him from accepting their business.

Klein says he is not anti-gay but would rather shut down his bakery than “be forced to do something that violates [his] conscience”.