More than 900 members of Jonestown, the informal name for the Peoples Temple Agricultural Project cult led by American preacher Jim Jones, died in a night of mass murder and suicide on Nov. 18, 1978.

Now the ashes of nine victims have been found among a stash of unclaimed containers at a Delaware funeral home.

USA TODAY says the remains ended up at the former funeral home, and others in the state, in the immediate aftermath of the massacre — which took place in Guyana, where cult leader Jim Jones and his followers had moved in order to escape mounting media scrutiny in the US.

Delaware state forensic investigators have taken possession of the remains and are continuing to identify them and make notifications to family members.

A compound owned by the Australian doomsday cult Agape Ministries has failed to sell at a forced auction.

Claiming that the apocalypse would take place in 2012 the cult’s leader, Rocco Leo, had convinced his followers that the Earth’s population will be unwittingly implanted with mind-controlling microchips.

Leo, also known as ‘Brother Rock’, also claimed Australia’s government would kill those who refused the chips in concentration camps.

He promised them a way out: a new life on an island in Vanuatu where they would remain safe while the rest of the world was destroyed. 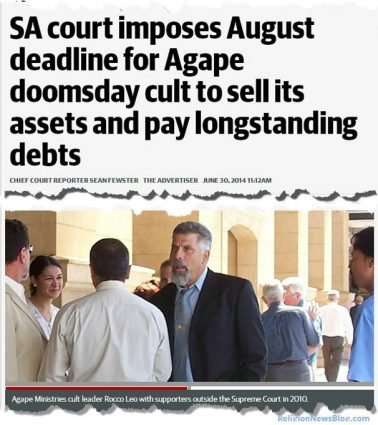 Rocco fled to Fiji after police raided one of his cult’s eight properties, where they seized an arsenal of weapons, high-powered ammunition and explosives.

The Australian Taxation Office subsequently stripped Agape Ministries of its tax-exempt status as a religion.

A court recently ordered sale of the cult properties in order to satisfy both its tax bill and a judgement awarded to one of the cult’s former followers.

“Common wisdom” is that higher education leads people way from organized religion. But according to a new study, that may no longer be true, Religion News Service reports.

Today, it’s the least-educated members of Generation X — people born roughly between 1965 and 1980 — who are “most likely to leave religion,” said Philip Schwadel, an associate professor of sociology at the University of Nebraska-Lincoln.”

His study is published in the August edition of Social Forces.

If evangelicals want to have a persuasive voice in a pluralist society, a voice that can defend Christians from serious persecution, then we must be able to discern accurately when we are truly victims of oppression—and when this victimization is only imagined.
– Source: Alan Noble, The Evangelical Persecution Complex, The Atlantic, Aug. 4, 2014

In-house news: We’re planning some changes at Religion News Blog — including a new design and a new approach.

Though the change is still some time (6-8 weeks) away, we’ve already moved to a different mailing list provider.

if you want to be kept informed about Religion News Blog, subscribe to our newsletter in the ‘Stay in Touch’ box to the left.

In Utah Bruce Wisan — the accountant in charge of the property trust that was seized from the polygamous Fundamentalist Church of Jesus Christ of Latter-Day Saints (FLDS) –has been charged with patronizing a prostitute, and the Utah attorney general’s office is considering whether to ask for his removal.

Created in 1942, the United Effort Plan (IEP) is a trust holding most of the property in Hildale, Utah, and Colorado City, Ariz., as well as property in Bountiful, British Columbia.

It allows followers of the FLDS — theologically a cult of Mormonism, and sociologically a high-control cult — to share in its assets.

Utah courts seized control of the trust in 2005 amid allegations by state attorneys that the cult’s leader, Warren Jeffs, along with fellow cult leaders had mismanaged its assets. Wisan was appointed to oversee the trust. (Jeffs has since been jailed for life for sexually assaulting two underage followers he took as brides in what his church deemed “spiritual marriages.”)

Residents in UEP homes are supposed to pay $100 a month and cover the property taxes. About 80 percent of residents have not been doing so and, at the instruction of Lindberg, Wisan recently began serving eviction notices on the debtors.

Wisan is scheduled to appear in Colorado City on Saturday for a community meeting about the evictions and other issues facing the UEP.

If convicted of the class B misdemeanor, Wisan could face up to six months in jail.

The title ‘cult expert’ is not protected. That means anyone can call him- or herself that — without having to meet any qualifications, obtain credentials, or even having had any formal training in, for instance, counseling or psychotherapy.

CultExperts.org lists some of the ‘buyer bewares’ in selecting a cult expert.

While there are many good lay experts, there are some charlatans, lone rangers, and muckrakers (including a plagiarist with impressive copy-and-paste skills) who are best avoided. 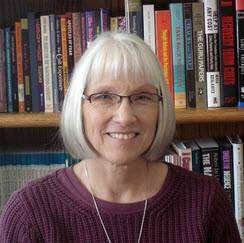 We highly recommend consulting the International Cultic Studies Association (ICSA) — an interdisciplinary network of academicians, professionals, former group members, and families who study and educate the public about social-psychological influence and control, authoritarianism, and zealotry in cultic groups, alternative movements, and other environments.

One of the professionals associated with the ICSA is cult expert Rosanne Henry, L.P.C., a professional counselor licensed in the state of Colorado.

A former cult member herself, Rosanne’ private practice specializes in the treatment of cult survivors and their families.

She presently sits on the board of ICSA and heads the Mental Health Committee. She also has facilitated ICSA’s Recovery workshops for twenty years.

Here’s a recipe for dissaster: China plans its own ‘Christian theology’.

Experts and church leaders say the government, which is skilled at heavy-handed persecution of religious believers, is scared by the massive growth of the Christian faith.

Official 2010 figures put the number of Christians in state-sanctioned churches at 23 million believers, but the country also has vast numbers of believers who meet in secret.

The Pew Research Center estimated that 58 million Protestants in the country practiced the religion in 2011, along with 9 million Catholics counted the year before.
Some experts say the total could be more than 100 million.

The church’s dramatic growth — and Christians’ allegiance to God above all else — has alarmed authorities, said Yang Fenggang, a Purdue University sociologist and leading expert on religious matters in China.