Reuters has published a special report on Myanmar’s official embrace of extreme Buddhism, saying that “Over the past year, radical monks have preached an anti-Muslim creed. The minister of religion, among others, approves.”

The extremist movement — referred to by The Straits Times (Singapore) as a “neo-Nazi group” — is known as 969. The three digits are said to symbolize the virtues of the Buddha, Buddhist practices and the Buddhist community.

Reuters‘ report shows why Myanmar’s Buddhists claim the 969 movement is, in part, a response to the Muslims’ use of the number 786 “which Muslims of South Asian origin often display on their homes and businesses.” The number is used as an abbreviation of an Arabic phrase which means ‘in the name of Allah, the compassionate, the merciful’. 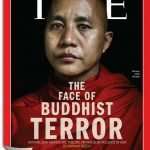 In a cover story titled The Face of Buddhist Terror, TIME magazine says that while Buddhism is known for its pacifism and tolerance, “in several of Asia’s Buddhist-majority nations, monks are inciting bigotry and violence — mostly against Muslims.”

The Irish government has agreed to pay up 58 million euros (69 million dollars / 49 million pounds) to hundreds of women forced to work at the Catholic Church’s notorious Magdalene Laundries after a report found that a quarter of them were sent there by the Irish state.

As depicted in the fictionalized movie account The Magdalene Sisters, Catholic nuns treated some 10.000 women and girls as young as nine like slaves:

The Catholic Church has claimed the movie’s story line is a fabrication, but research shows the treatment and circumstances in the church’s so-called Magdalene Asylums were horrendous, to say the least.

Four members of a sect in Belgium will not have to return to jail after a court in Leuven handed down conditional sentences in the violent death of former sect member Renate Jonkers.

The Dutch woman died in December, 2007, during what the sect members claimed was a healing ceremony — which took place after the woman had already officially left the group. 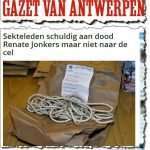 Reportedly Jonkers had agreed to the healing ceremony as a condition for her return to the group. She died after the sect’s guru, Drazen Zabek, strangled her with a rope during the ceremony.

The jury determined that the four sect members knew the healing ceremony was going to be violent, but that they had not intented to kill the woman.

Jonkers’ body was found in May 2008, buried in the garden of the group’s villa in Bekkevoort, Belgium.

Her death came to light after the Netherlands Justice Department fingered Zabek as a suspect in the kidnapping of another woman from Holland.

That woman, who has remained anonymous, left the movement after resisting the guru’s efforts to isolate her by encouraging her to break off her social contact.

The guru also wanted to ‘liberate’ her via intercourse, and claimed she was his ‘chosen one.’

After she left the group, Zabek and three others kidnapped the woman from her home in Eindhoven, Netherlands. They took her first to Bekkevoort, and later to Amsterdam to attend a meeting with Australian Satsang guru Isaac Shapiro.

During that meeting Shapiro had Zabek, who was drunk and misbehaving, removed from the meeting hall. In the commotion the kidnapped woman alerted bystanders.

Police subsequently arrested the sect members, and Jonkers’ body was discovered during the investigation that followed.

Sect member Bettina Van Berckelaer (51) was found guilty of assault and causing bodily harm without the intention to kill.

The other three sect members, Remco Van Dijk (40), Davy De Bakker (30) en Ben De Bakker (57) were found guilty of gross negligence in that they did not intervene.

You know that anti-gay (and seemingly anti-everyone) hate group in Topeka, Kansas that passes itself off as a Baptist Church, but acts like it was created in hell? Its members had to endure a lesbian wedding that took place on the lawn of the rainbow-color Equality House — just 50 feet from their property.

In our view, Christians — and those pretending to be — are entitled to their opinions. But by engaging in acts of hatred and behaving like rabid dogs, the members of Westboro Baptist Church demonstrate they don’t know the God they pretend to represent.

As you know, the U.S. Supreme Court has dealt two major setbacks to gay-marriage opponents:

As you might expect, religious leaders are divided on the decisions.

What do Americans think about gay and lesbian issues? Here’s a fact sheet from the Public Religion Research Institute.

ReligionLink has a collection of research resources on the topic.

Apologetics Index lists research resources from a variety of perspectives on, primarily, Christianity and homosexuality.

As for the Westboro folks? They have, predictably, freaked out (though given the way they ‘normally’ behave few people have noticed).

Ten-time Grammy-award winning artist Bobby “Don’t Worry, Be Happy” McFerrin says his Christian faith permeates everything he does. When he was 16 he wanted to be a monk because the quiet, structured life appealed to him, but in his early 20s he realized he was meant to be a singer.

Recently McFerrin performed songs from the new album at Talks At Google: