You are here: Home | bruderhof | Bruderhof cult doctor to appear before medical tribunal

Australian health authorities are trying to determine why a doctor who lives with the Bruderhof, a religious cult, failed to report his mother’s death — as well as the fact that she was buried on the sect’s private land.

On holiday from the US, the woman, Irene Maendel, collapsed of a suspected stroke and later died while staying at the religious community. 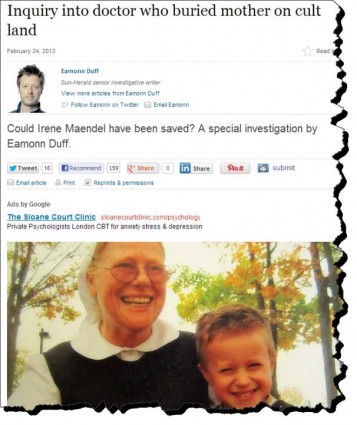 Documents presented at a coronial inquest raised questions about whether the woman was denied treatment that could have saved her life. Police have confirmed that after the woman collapsed no ambulance or help from the outside world was sought. A hospital is located at less than a 30 minute drive from the Bruderhof community of Danthonia, New South Wales.

Coroner Michael Holmes has refused to comment on the suggestion that Mrs. Maendel’s demise had been turned into a “church event.”

The Health Care Complaints Commission is bringing the woman’s son, Dr. Chris Maendel, before a medical tribunal today. It is alleged that he chose not to have her treated in hospital “because he believed she wanted to be surrounded by her faith and her friends when she died.”

Meanwhile authorities have widened their investigation to include two nurses who were allegedly present.

The news comes as the Dutch-based granddaughter of the Bruderhof founder, Dr Eberhard Arnold, lashed out at the movement, labelling it “a cult“. Dr Arnold founded the Bruderhof in Germany in 1920, aiming to build a community in which love and justice overcame isolation and greed.

“I am so angry and sad,” said his granddaughter, Elizabeth Bohlken. “It has become the exact opposite of what my grandfather set out to achieve.” She described the death of Irene Maendel, her lifelong friend, as horrific, saying: “The story needs to be told, and judged by human standards and laws today.”

Theologically, the Bruderhof is a cult of Christianity — meaning that its theology and practice fall outside the boundaries of the Christian faith.

Sociologically the Bruderhof has various cult-like aspects as well — including a heavy-handed, authoritarian leadership style, and the practice of shunning those who have been ‘cast out.’

The group — which has communities in the United States, United Kingdom, Germany, Australia, and Paraguay — has used strong-arm litigation tactics to try and stifle online criticism.

Coinciding with the Australian inquiry the group is currently trying to market itself via YouTube.

Also on YouTube, this CBS 48 Hours segment on the Bruderhof also known as Church Communities International, filmed in late 1996 and aired in March 1997: