One of Western Australia’s greatest mysteries has gained international exposure as Australian Federal Police try to re-ignite new leads into the case of missing Nannup mother Chantelle McDougall and her daughter Leela.

The 30-year-old and her six-year-old daughter went missing in October 2007, together with partner Gary Feldman, 45, and friend Antonio Popic, 40.

Mr Feldman was only ever known in Australia as Simon Kadwell, a false alias he picked up from England before emigrating in 2000. He was also Leela’s father.

Since their disappearance, he has been linked to a sect based on a doomsday book called Servers of the Divine Plan, which calls on “servers” to take up their positions on Earth before the world’s imminent end and rebirth.

The family and their lodger, Mr Popic, who lived in a caravan on their South-West property, mysteriously vanished, leaving behind wallets, credit cards and dirty plates on the table. […]

Ms McDougall’s parents, Jim and Cathy McDougall, have not given up hope of finding their daughter and granddaughter safe and well, but remain convinced it was Mr Feldman who persuaded them to disappear.

“Originally this guy – Gary Feldman, as we know him now – claimed to be some sort of religious guru and he enticed them into his little flock that way,” Mr McDougall said. […]

AFP Missing Persons Co-ordination Centre team leader Rebecca Kotz agreed, saying: “This case is so baffling to police because there are no leads.”

Investigators have so far worked with WA Police, Scotland Yard and US authorities. However this week, as a part of Missing Person’s Week, they have stepped up the campaign by involving the global missing children network, which has 19 member countries.

“All of the profiles that are submitted (to the International Centre for Missing and Exploited Children), of which Leela was one of our Australian profiles, will be featured all around the world,” Ms Kotz said.

She said the centre has started a Facebook page this year which includes every profile on AFP’s website helpbringthemhome.org.au. 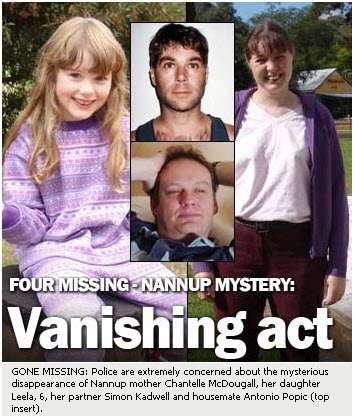 Note: in media reports the name of the ‘cult guru/conman’ has variously been reported as ‘Simon Kadwill’ and ‘Simon Kadwell.’

Missing Briton may be conman