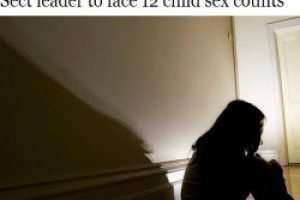 A former leader of a secretive sect considered to be a cult of Christianity faces twelve charges of unlawful indecent assaults and gross indecency on three young female victims.

Chris Chandler was promoted to the senior position of “worker” — the sect’s terms for “minister” — even though senior members were aware of allegations against him.
[Continue Reading...]