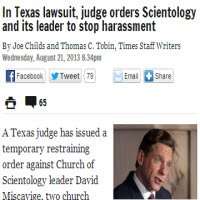 Clear talk from Lawrence Wright, author of Going Clear: Scientology, Hollywood, and the Prison of Belief in Talking Scientology: A Q&A with Going Clear Author Lawrence Wright: David Miscavige is different from L. Ron Hubbard mainly in the fact that he grew up in Scientology. He’s a product of it in a way that Hubbard was not. He joined the Sea Org when he was sixteen, so, virtually, his entire life has been lived inside the strictures of this organization. The product of that is a glaring indictment of the church itself, because if that is what it produces —
[Continue Reading...]

An Australian resident has told Lateline, an Australian television news and current affairs program, that the Church of Scientology imprisoned her on its cruise ship The Freewinds.

Valeska Paris says the Church of Scientology’s leader David Miscavige — who she describes as a psychopath — sent her to the ship when she was 17, to prevent her mother taking her away from Scientology.
[Continue Reading...]

Miscavige described Anonymous as a group of “mask-wearing subversive and anarchistic internet denizens,” The Register reports. Big words for a man who heads an organization some consider a hate group at best and a fraudulent business enterprise marketing quackery under the guise of religion.

Miscavige’s declaration brings to mind former President George Bush’s early declaration that the War in Iraq was won days after the capture of Baghdad, says The Register

WhyWeProtest (WWP), run by the anti-Scientology part of Anonymous, maintains a portal explaining its aims and objectives here.

Meanwhile, by way of a consumer alert, read up on Scientology and marvel at the idiocy of the cult’s founder L. Ron Hubbard — a man who, not surprisingly, had trouble separating truth from fiction.

Incidentally, if you do decide to hand over your money and your mind, here’s a buyer beware: you may also be forced to lose your family and friends. Here is how Miscavige’s niece described that horrendous side of Scientology.

Since its inception in the 1950s, the Church of Scientology has rarely been far from controversy.

And now some senior insiders who have left the church are leveling disturbing accusations against the current leader, David Miscavige.
[Continue Reading...]

11 more defectors from the Church of Scientology have provided accounts of physical or mental abuse by Scientology leader David Miscavige.

The cult — known for its hate- and harassment activities, including character assassination — has a hypocritical response. Yet it cannot get around the fact that its founder codified unethical behavior toward those who criticize Scientology.

More evidence that the cult’s glossy ads hide a stark truth: that of a destructive cult in decline.
[Continue Reading...]

In an open letter to a senior Scientology official that has been widely posted on the Internet, Jenna Miscavige Hill described how her own family was broken apart by the movement’s policies.
[Continue Reading...]

David Miscavige, the seldon-seen leader of the church, comes forth in his first newspaper interview to talk of a more peaceful time for Scientology.
[Continue Reading...]