Plus other highlights from Religion News Blog’s Twitter feed.

Also: dangerous giant snails, and their connection to a religious cult. 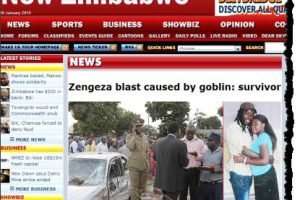 A witchdoctor and four others were killed in an explosion allegedly caused when the sorcerer tried to behead a goblin for a customer.

Also: a feud between Biblical archeologists leads to a lawsuit. Plus: Mexican officials have broken up a bizarre cult called the “Defensores de Cristo” (“Defenders of Christ”).

The murderer of an Imam deemed to be a heretic has been sentenced to 25 years to life in prison.

Plus more religion news briefs, including items about Scientology, Colonia Dignidad and the Roman Catholic Church.

A little over two years ago former Nazi Paul Schaefer, who founded a secretive German cult in Southern Chile in the 1960s and was later convicted of sexually abusing children, died of heart failure in a prison hospital.

But today, ten years after Chilean police raided Colonia Dignidad’s properties, many of his victims are still seeking closure from the human rights abuses they experienced.

Rebeca Schaefer and Peter Schmidt are accused of kidnapping, manslaughter and membership of an illicit organisation.

Former Nazi Paul Schaefer, who founded a secretive German cult in Southern Chile in the 1960s and was later convicted of sexually abusing children, died of heart failure in a prison hospital Saturday, officials said.

The founder of a religious cult whose followers thought he was “God on earth” has been sentenced for torturing children.

He preached an unnamed religion that said harsh discipline would draw them closer to the supreme being.