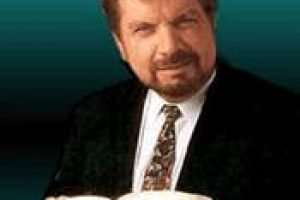 If you’re not familiar with the 58 day seed covenant here’s how it works: Send Mike Murdock 58 dollars and tell him what you want. Got debt? Need healing? Looking for a husband? A Wife? Whatever it is, send Mike Murdock 58 dollars, tell him what you want from God, and within 58 days you’ll have it. One blogger put that claim to the test.
[Continue Reading...]

HALTOM CITY, Texas – (KRT) – Televangelist Mike Murdock‘s new supermarket-size church has two types of entrances: public and private. One leads to a sanctuary where worshipers gather to hear Murdock, 58, preach on Sunday mornings. But as the door to the church opened, the private entrance to the ministry’s finances slammed shut. This summer, Murdock began converting the Mike Murdock Evangelistic Association into a church in North Texas known as The Wisdom Center. As a church, its spending is secret under laws meant to keep government and religion separate. Since the Fort Worth Star-Telegram began an investigation in 2002,
[Continue Reading...]

Fort Worth Star-Telegram, Mar. 4, 2003 http://www.dfw.com/ By Darren Barbee, Star-Telegram Staff Writer Third of three parts. Part one. Part two. He’s been there, where you’re at now. Mike Murdock has been down and out — no money, sheets tacked up as curtains. He’s been so broke that he had only $10 in his pocket when he needed $3,000 to give to a minister. He’s been heartbroken from a failed marriage; uncertain; even, he says, a doubter of the Bible. In 1997, Murdock told viewers of his television program Wisdom Keys that he has had his world come apart. “I
[Continue Reading...]

Fort Worth Star-Telegram, Mar. 3, 2003 http://www.dfw.com/ By Darren Barbee, Star-Telegram Staff Writer Second of three parts. Part 1. Part 3. The brass-colored door knocker on the small house in Argyle is engraved with the words The Murdocks. The Rev. J.E. Murdock, wearing a blue jumpsuit, answers the door of the home he believes his son, Denton televangelist Mike Murdock, bought for him. The house is tax-exempt and belongs to the nonprofit Mike Murdock Evangelistic Association, Denton County records show. J.E. Murdock is a lean, broad-shouldered man with a firm handshake. And even if some memories have faded from the
[Continue Reading...]

Denton televangelist Mike Murdock makes few distinctions between his resources and those of the ministry he founded. Some critics question whether his actions are proper. Fort Worth Star-Telegram, Mar. 8, 2003 http://www.dfw.com/ By Darren Barbee, Star-Telegram Staff Writer First of three parts. See also. Part two. Part three. Not too long ago, Denton televangelist Mike Murdock got an idea, he said during a television broadcast in November. What was it? He didn’t say. He said only that it made him thousands of dollars. In 2002, with the money from that idea, he said, he bought a 1973 Cessna Citation 500,
[Continue Reading...]

A Denton televangelist who says his mission is to rescue people from poverty is living lavishly, while the ministry he founded spends most of its money on overhead, an examination finds. Fort Worth Star-Telegram, Mar. 2, 2003 http://www.dfw.com/ By DARREN BARBEE, Star-Telegram Staff Writer First of three parts. See also. Part two. Part three. Mike Murdock peers into the television camera, seemingly able to see the people watching him. He says he can sense that the poor, the struggling and the lonely have tuned in to his program. “You’ve got to have a breakthrough,” he tells them. Murdock offers the
[Continue Reading...]