You are here: Home | Study: Protestant pastors often unfamiliar with such religions as Hinduism, Buddhism

NASHVILLE, Tenn. (BP)–Protestant ministers in the United States often have moderate familiarity with the core beliefs of Islam but little familiarity with religions such as Hinduism, Buddhism, Scientology or Wicca, according to a recent study. Protestant clergy tend to be most familiar with Roman Catholicism and Judaism among non-Protestant faith groups, the study found.

Ellison Research, a full-service marketing research firm in Phoenix which conducted the research for the September/October issue of LifeWay’s Facts & Trends magazine, reported that large numbers of Protestant clergy have little familiarity with the core beliefs of numerous non-Protestant religious groups. 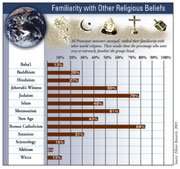 If the top two levels of familiarity on the survey scale (ratings of 5 and 4) are grouped together, 85 percent of all Protestant clergy claim to be relatively familiar with the core beliefs of the Roman Catholic Church, and 80 percent are familiar with the core doctrines of Judaism. This decreases to 61 percent for Mormonism, and 60 percent for Jehovah’s Witnesses, Ellison said. These are still the only four faith groups with which a majority of Protestant ministers are relatively familiar.

On the other end of the scale, if the two lowest responses (1 and 2) are combined, large numbers of Protestant clergy have little or no familiarity with the beliefs of Buddhism (33 percent), Hinduism (35 percent), Satanism (45 percent), Scientology (54 percent), Baha’i (66 percent), Wicca (67 percent) or Sikhism (85 percent).

Baptist Press
This article was posted with the kind permission of Baptist Press, in which it appeared first
Baptist Press (BP) has been the daily national news service of Southern Baptists since 1946.
Sign up to receive (BP) delivered daily to your electronic mailing address by clicking here.

Familiarity with different faith groups does not vary much by different areas of the country, but there are some differences denominationally. On average, of five major denominational groups examined separately in the study findings, Methodists are the least likely to be familiar with the beliefs of other faith groups. Methodist ministers’ familiarity with Islam, Jehovah’s Witnesses, Satanism and New Age beliefs is particularly low.

Ministers in Pentecostal and charismatic denominations also tend to be less familiar than average with other belief systems. Pentecostal clergy have a relatively high level of familiarity with Satanism compared to other denominations but are average or below average on the other faith groups. Pentecostal ministers are especially likely to be unfamiliar with the core beliefs of Islam, Hinduism and Judaism.

Ron Sellers, president of Ellison Research, expressed surprise at the findings about Pentecostal and charismatic clergy.

“Evangelism and conversion are very strong influences in Pentecostal theology and practice, and Pentecostal clergy tend to have particularly strong beliefs that Christianity is the only path to salvation,” Sellers said. “Trying to reach people who hold other beliefs is more likely if you understand what those beliefs are. Yet the study demonstrated that Pentecostal and charismatic clergy are often below average in their familiarity with the beliefs of non-Protestant faith groups. Given the importance these pastors often place on evangelism, one might expect just the opposite, so this is a surprise.”

Ellison Research said its sample of 700 Protestant ministers included only those who are actively leading churches. The study’s total sample is accurate to within plus or minus 3.6 percentage points at the 95 percent confidence level with a 50 percent response distribution. The study was conducted in all 50 states, using a representative sample of pastors from all Protestant denominations. Respondents’ geography, church size and denomination were tracked for appropriate representation and accuracy.

More complete data from these questions, including denominational detail, is available at www.ellisonresearch.com/PastorStudy.htm.