You are here: Home | Woman’s stand against hatred inspires many

”Just a small act turned really big,” said Laquetta Shepard, who halted the Bowling Green rally by silently stepping amid a small group of Klan supporters with tears in her eyes.

Despite being told to move and being called a ”monkey” by Klan supporters, the 24-year-old black woman peacefully stood her ground, and the Klan members left 40 minutes early.

Shepard’s story has touched hundreds of people, including many who she said have written her letters, sent e-mails and called to say they were grateful for her bravery. No one has expressed any criticism, she said. 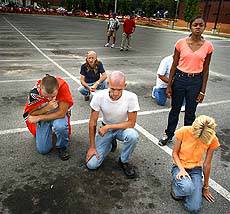 ”When I saw the photo and read the story, it was a really powerful moment,” said Kelvin Datcher, outreach coordinator for the Southern Poverty Law Center in Montgomery, Ala.

”We track hate groups all across the country. Our normal course is to recommend that people not attend these events. What happened there is a great testament to one lady’s internal strength,” said Datcher, who said about 20 people e-mailed him copies of The Courier-Journal article on Shepard’s stand.

”I want to move people, if I can change people’s lives for the better,” said Shepard, a senior at Western Kentucky University. ”I’ve definitely touched some people.”

One of those people was Joey Mau, an English teacher at East Jessamine County High School in Nicholasville.

”We’re about to go into a pretty mournful week next week,” Mau said. ”And to be able to see something like that and so close to home in the face of Sept. 11, it’s amazing. It makes being an American something to celebrate.”

Mau made copies of the article about Shepard, who is studying to become an elementary school teacher, and asked his junior English students whether they would like to write to her. All but two of the 32 students in his class did so.

”The words that I kept hearing repeated were ‘bravery’ and ‘being able to stand in the face of intolerance,’ ” Mau said. ” ‘A true hero,’ one student said. ‘As a teen-ager growing up in rural Kentucky, a lot of my friends are racist. I find it sad that people can build up so much hate over skin color and religion,’ ” were the words of another student.

”They were all very impressed,” Mau said.

”As soon as I read the story, I took great pride in her action,” Ransdell said.

”I think it speaks to her character and her conviction for doing the right thing. I don’t know her personally, but I’m going to get to know her,” he said.

”She has demonstrated what I would like for a role model to be among our students, faculty, staff and alumni — a role model in this entire academic community. I would hope that we would have many students and others who would have equal conviction.”

The Rev. Charles Wiley, who attends Buechel Presbyterian Church in Jefferson County, said he used Shepard’s story during services last Sunday as an example of how to allow God’s justice to show.

”I thought it was an extraordinary example of courage in a difficult time and appropriate restraint so that the truth seemed to shine forth more than anything else,” said Wiley, whose wife, Betsy, shared Shepard’s story with her children.

”When I saw it, it made me think about Dr. (Martin Luther) King and everything that he tried to promote, not being a wimp but also not being violent,” Betsy Wiley said. ”I told my kids about her and showed them her picture, and I want them to aspire to be that kind of person. I think it’s really cool for kids to have someone like her.”

Shepard, who describes herself as ”a very spiritual person,” attends 11th Street Baptist Church in Bowling Green. The experience has deepened her faith, she said.

”I feel like God was using me” to send a message, Shepard said. ”I’ve been trying to grow spiritually. I always pray for strength. This past weekend showed a lot of strength.”

Shepard, a Shively native, is a 1997 graduate of Doss High School, where she was a Governor’s Scholar and spoke to young people about gangs and violence.

At Western, where Delta Sigma Theta sorority honored her for volunteer work, she will become the first college graduate in her immediate family in May.

”My whole purpose in teaching is to make a difference,” Shepard said, ”and I made a difference just by walking over the line” from Klan opponents into an area cordoned off for Klan supporters.