You are here: Home | Woman loses her job over coffins photo

A military contractor has fired Tami Silicio, a Kuwait-based cargo worker whose photograph of flag-draped coffins of fallen U.S. soldiers was published in Sunday’s edition of The Seattle Times.

“I feel like I was hit in the chest with a steel bar and got my wind knocked out. I have to admit I liked my job, and I liked what I did,” Silicio said. 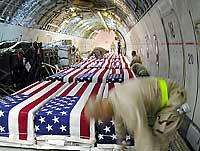 Flag-draped coffins are shown inside a cargo plane April 7 at Kuwait International Airport, in a photograph published Sunday. The photographer said she hoped the image would help families understand the care with which fallen soldiers are returned home.

Her photograph, taken earlier this month, shows more than 20 flag-draped coffins in a cargo plane about to depart from Kuwait. Since 1991, the Pentagon has banned the media from taking pictures of caskets being returned to the United States.

Tami Silicio’s photo fueled a debate over a U.S. policy on casket images.

That policy has been a lightning rod for debate, and Silicio’s photograph was quickly posted on numerous Internet sites and became the subject of many Web conversations. Times Executive Editor Michael R. Fancher yesterday appeared on ABC’s “Good Morning America” news show with U.S. Rep. Mike Castle, R-Del., who supported the Pentagon policy prohibiting such pictures.

As a result of the broader coverage, The Times received numerous e-mail and phone calls from across the country — most of which supported the newspaper’s decision.

Pentagon officials yesterday said the government’s policy defers to the sensitivities of bereaved families. “We’ve made sure that all of the installations who are involved with the transfer of remains were aware that we do not allow any media coverage of any of the stops until (the casket) reaches its final destination,” said Cynthia Colin, a Pentagon spokeswoman.

Silicio said she never sought to put herself in the public spotlight. Instead, she said, she hoped the publication of the photo would help families of fallen soldiers understand the care and devotion that civilians and military crews dedicate to the task of returning the soldiers home.

“It wasn’t my intent to lose my job or become famous or anything,” Silicio said.

The Times received Silicio’s photograph from a stateside friend, Amy Katz, who had previously worked with Silicio for a different contractor in Kosovo. Silicio then gave The Times permission to publish it, without compensation. It was paired with an article about her work in Kuwait.

Silicio, 50, is from Edmonds and previously worked as an events decorator in the Seattle area and as a truck driver in Kosovo. Before the war started, she went to work for Maytag, which contracts with the Air Mobility Command to provide air-terminal and ground-handling services in Kuwait.

In Kuwait, Silicio pulled 12-hour night shifts alongside military workers to help in the huge effort to resupply U.S. troops. These workers also helped transport the remains of soldiers back to the United States.

Her job put her in contact with soldiers who sometimes accompanied the coffins to the airport. Having lost one of her own sons to a brain tumor, Silicio said, she tried to offer support to those grieving over a lost comrade.

“It kind of helps me to know what these mothers are going through, and I try to watch over their children as they head home,” she said in an earlier interview.

Since Sunday, Silicio has hunkered down in Kuwait as her employer and the military decided her fate.

Maytag’s Silva said the decision to terminate Silicio’s and Landry’s employment was made by the company. But he said the U.S. military had identified “very specific concerns” about their actions. Silva declined to detail those concerns.

“They were good workers, and we were sorry to lose them,” Silva said. “They did a good job out in Kuwait and it was an important job that they did.”

Landry, in an e-mail to The Times, said he was proud of his wife, and that they would soon return home to the States.