BANGKOK, Thailand (AP) — Victoria’s Secret — the American company known for its racy lingerie — may have gone too far with its new bikini featuring images of Buddha.

The swimsuit has angered government officials and clergy in this mainly Buddhist country, who plan to ask the company to suspend worldwide sales of the offending item and are considering banning its import into Thailand.

The swimsuit, with pictures of a seated Buddha on the breast areas of the halter, “is a major insult to Buddhism,” said Gen. Amnuay Phetsiri, the deputy chief of the national police of Thailand.

Victoria’s Secret does not have any outlets in Thailand, and no local company imports its products. 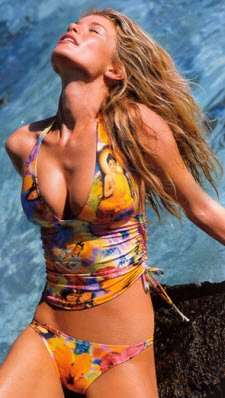 Amnuay, the deputy police chief, however, said police are looking at the legality of preventing the import of the swimsuit by businesses and individuals.

Thailand’s Foreign Ministry has also asked its embassy in the United States to appeal to Victoria’s Secret to immediately halt sales of the swimsuit, said the ministry spokesman, Sihasak Phuangketkeow.

The swimsuit has also raised the ire of the Office of National Buddhism, which said it would file a complaint to the Foreign Ministry.

“Lord Buddha is the most respected figure in Buddhism. Although the company is free to do this, it should think of our feelings,” said Udom Charoen, the director of the Office of National Buddhism, a state body for promoting and preserving the religion.

The suit also features an image of Boddhisatava, a Chinese goddess figure from Buddhism’s Mahayana sect, in the lower part of the halter.

Although Thailand is a largely tolerant society, Thais do not take kindly to inappropriate portrayal of Buddha and their king, a highly respected and loved figure.

Two years ago, a newspaper advertisement by a Thai-themed restaurant in the United States spoofed the Thai king, touching off a storm of protest in Thailand. The restaurant owner later removed the advertisement.