You are here: Home | Norah Jones : Feels Like Home

• Looking for news items? Click here for the latest headlines
The information on this page helps support Religion News Blog.

Norah Jones’s “Come Away With Me“ is on the fast track to sell 10 million copies in the United States, still a rare accomplishment, considering that fewer than 100 albums have reached that level and that some major artists — the Rolling Stones, for example — never have, except for hits compilations.
[…]

If Jones’s new album, “Feels Like Home,” follows suit, she will join an even more elite group: only a handful of artists have had back-to-back 10-million sellers…

Though it’s unrealistic to expect “Feels Like Home” to match the stratospheric sales of “Come Away With Me,” Blue Note executives know that even stellar sales could be viewed as disappointing if they don’t reach the same high watermark.

Crazy, maybe, but that’s the benchmark set by Jones’ first album, “Come Away With Me.” It sold 18 million units worldwide, according to her label. Of those, 7.8 million moved in the U.S., according to Nielsen SoundScan.

“There is so much excitement, and that’s one of Norah’s concerns, too,” Lundvall continues. “So we’re not hyping the record. We’re not going out there and advertising all over the world. We have a very solid plan, but it’s not over the top. We’re not saying this is the best artist of the last 50 years.”

“It’s not like the last record, kept the same mood,” says Jones. “People liked that, and it was also the criticism.” 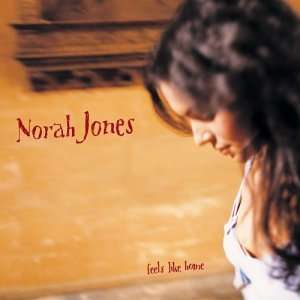 Jones wrote or co-wrote seven tracks on the album, working primarily with her bandmates. “This album, I was really adamant about wanting to be all the band and no one else,” she says.

Among the few outsiders allowed were guest stars Dolly Parton and the Band’s Garth Hudson and Levon Helm. There are also covers of tunes by Townes Van Zandt and Tom Waits and his wife, Kathleen Brennan.

Source: A New Album, Big Expectations for Jones, Reuters/Billboard, Jan. 24, 2004
…[P]erfectionism has become her hallmark. It’s what helped give ”Come Away With Me” its preternatural sound — no other musician in her early 20’s has recently been so conversant with both Hank Williams and Hoagy Carmichael — and the exactingness is understandable given that ”Feels Like Home” is probably the music business’s most-anticipated release of 2004. (It comes out Feb. 10.) If the new album generates a small fraction of what its predecessor did, it could keep a few developing countries running for years. The making of ”Feels Like Home” also marks the culmination of a two-year ”tornado,” as Jones puts it, during which she had little time for anything but touring and recording. ”I think we came out on the right end,” she said. ”But I have no friends.”

That’s not true. There’s her band, plus the 17 million people worldwide who bought ”Come Away With Me,” not to mention an entire music industry, desperate for hits, that is depending on her, even though very few artists have produced back-to-back phenomena. Just ask Alanis Morissette or Lauryn Hill.

It’s a lot of weight for 24-year-old shoulders to bear, especially considering that Jones often seems as if she would like nothing better than to shoot pool with her band. And now the tornado is starting to whip up again. ”I am,” she said, ”so tired.”

“Come Away With Me” was more than just a force of nature. It was a small miracle. The album, with its pearly style-skimming (a plink of jazz here, a splash of country there, several lappings of pop), had the luxury of incubating during Jones’s two-year apprenticeship in New York, performing in venues often barely bigger than a walk-in closet. Its low-fi sound was romantic and elegant but positively antediluvian: mostly acoustic, quiet in an age of hip-hop histrionics, something of a sonic antiboom. The greatest hope Jones had was that it would sell enough to let her make another one. But then ”Come Away With Me” started to spread slowly, almost pointillistically, into the musical psyches of ”80-year-old grandmas and 7-year-old girls and everyone in between,” as its producer, Arif Mardin, said recently. The success happened without the usual promotional tools, a Top 10 pop radio hit or a high-concept video, on a boutique jazz label, Blue Note, whose executives usually listen for talent first and chart positions later, if at all. Julian Fleisher, a New York nightclub singer who released his own album of smart, genre-busting pop in 2002, said: ”It was like Howard Dean. It was a grass-roots success that people heard about in their living rooms. That’s where I heard it first — in someone’s living room.”