Jeremiah Duggan, 22, died from fatal head injuries in the city of Wiesbaden, Germany, on March 27, 2003 after he had ran onto a motorway in front of traffic and was hit by two cars.

The British student’s death baffled German police and was labelled a suicide.

However, in November 2003 a coroner at a British inquest denounced the Germany police report, and stated that Duggan had died ‘in a state of terror.’

Duggan’s mother has said that 45 minutes before her son died, he had called her, saying, “I’m in big trouble.” 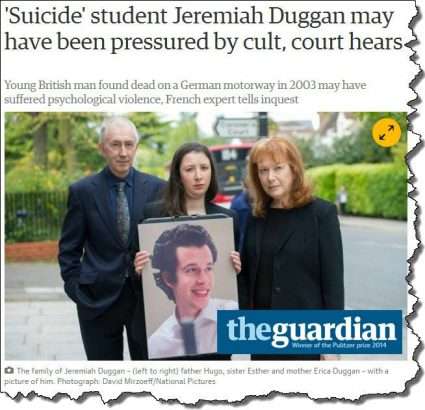 The court heard from the former French MP and cult expert Catherine Picard, who told the court that Duggan might have faced intense pressure and psychological violence during the conference, with hours of lectures, one-to-one sessions and more than 30 pages of reading to review every day — The Guardian

While studying at the Sorbonne in Paris, Duggan had become involved with Nouvelle SolidaritÃ© — a newspaper published by Lyndon La Rouche, an American right-wing conspiracy theorist.

Scotland Yard describes the LaRouche Movement in an internal report as a ‘political cult with sinister and dangerous connections.’

Duggan had traveled to Germany for a conference at the Schiller Institute, part of LaRouche’s group.

It is not known what led the student to call his mother, as well as his girlfriend, and then to run into traffic.


But Andrew Walker, a coroner in England, has now ruled that the young man did not commit suicide.

the coroner also rejected the assertions of several expert witnesses instructed by the Duggan family, that the scene of their son’s death had been arranged to appear as suicide.

The coroner’s report says injuries discovered by a pathologist suggest that Mr Duggan may have been involved in an altercation at some stage before his death.

“The fact that he attended a conference run by this far-right wing organisation and the method that the organisation used to recruit young persons at that time against the background of the start of the Iraq war, together with Mr Duggan expressing that he was a Jew, British and questioning the material put before him, may have had a bearing on Mr Duggan’s death in the sense that it may have put Mr Duggan at risk from members of the organisation and caused Mr Duggan to become distressed and seek to leave.”

While Jeremiah’s family expressed gratitude to the coroner, it was also disappointed that the coroner rejected the findings of six British and European experts in favor of “the disputed evidence relied upon by the German authorities.”

Erica Duggan says she will continue to seek justice for her son, but the BBC quotes her as saying,

“I’m not sure I will do it through the justice system because I would like to think very hard about whether or not the kind of investigations that have gone on in Germany and also in Britain have led me to find out how my son really died.

Jeremiah’s family want German authorities to open a new, deeper investigation, including examining the role played by the LaRouche organisation.

The student, the shadowy cult and a mother’s fight for justice
Family’s ten-year quest for truth about dead son
Twitter: Justice For Jeremiah
Information about Lyndon LaRouche’s Political Action Committee — on the website of cult expert Steve Hassan.