… Former members of a church in Palmerston, New Zealand, say they were suicidal, depressed and in need of counselling after leaving the “cult-like” church and being shunned by their friends and family.

Nearly a dozen people with connections to the Palmerston North Victory Christian Church have come forward following a series of stories in the Manawatu Standard highlighting concerns about the parish’s practices, including manipulating marriage pairings, financial coercion, alienating people from parents, public shaming of members and excessive control over the congregation’s strong student membership.

Each of the churches targets students at nearby universities.

… Groups that have succeeded the Aum Shinrikyo doomsday cult were still under the strong influence of Aum guru Shoko Asahara, who is now on death row, a report by Japan’s Public Security Intelligence Agency says.

Asahara’s influence appeared to be absolute in successor groups Aleph and the Circle of Rainbow Light, or “Hikari no Wa,” said the annual report, which was adopted at a cabinet meeting the same day.

Last January Japan’s Public Security Examination Commission announced that surveillance of the cult has been extended for three more years. The extension is the fifth since surveillance began in January 2000 and will apply to both Aleph and Hikarinowa. 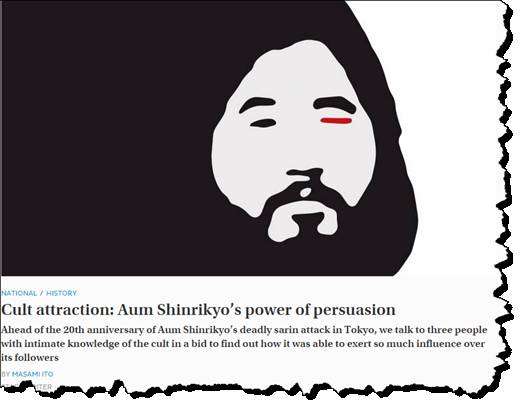 In 2012, cult experts expressed the hope that the trial of Katsuya Takahashi, who was the cult’s last fugitive, would raise awareness of the potential dangers of joining Takahashi’s trial is currently underway.

… In her book, “Heretic: Why Islam Needs a Reformation Now” outspoken Islam critic Ayaan Hirsi Ali — herself a former Muslim — argues for a complete reformation of Islam, akin to the Protestant Reformation of the 16th century.

According to Hirsi there are three kinds of Muslims: the violent, the reformers, and what she believes is the largest group — those who want to practice as they see fit and live peaceably but do not challenge the Quran, the Muslim world’s treatment of women and the LGBT community, or terrorist attacks committed in the name of Islam.

She does not label those who belong to the latter group as ‘moderates,’ because she believes they have done nothing to deserve it.

Ali argues for five amendments to the faith. “Only when these five things are recognized as inherently harmful and when they are repudiated and nullified,” she writes, “will a true Muslim reformation have been achieved.”

Those five notions are:

Rejecting these ideas, some of which date to the 7th century, is a shocking proposition to the faithful.

“The biggest obstacle to change within the Muslim world,” Ali writes, “is precisely its suppression of the sort of critical thinking I am attempting here.”
– Source: ‘In Islam, they are all rotten apples’: Ex-Muslim’s call for religion’s reboot, New York Post, March 22, 2015

In an article published by the Wall Street Journal, Ali provides some details regarding her suggested amendments: