However, various official biographies of Berland contain no reference to the Holocaust. 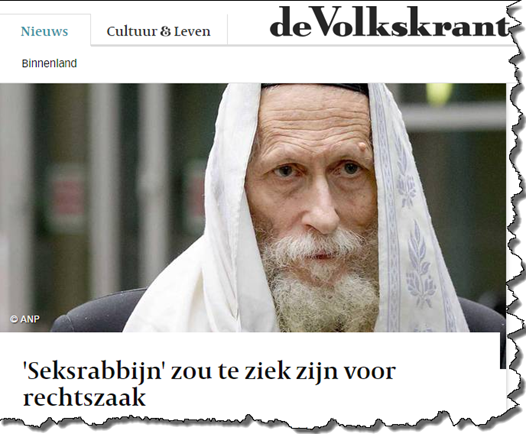 Berland, 77, fled Israel two years ago after several women and one minor complained he sexually assaulted them. He has been expelled from Morocco and Zimbabwe, and he has also stayed in the United States and Zwitserland. Berland, whom the Dutch media have dubbed ‘the sex rabbi,’ fled several other countries, including South Africa where authorities tried twice to arrest him.

He was arrested in Amsterdam last September during a layover at Schiphol airport on his way from South Africa to the Ukraine.

The Jewish Telegraphic Agency says, “The Dutch justice ministry supported Berland’s extradition, rejecting arguments by Berland’s lawyer, who says Berland is innocent, too ill to stand trial and that Israel lacks jurisdiction. A court in Schiphol is scheduled to rule on his case next month.”

Meanwhile, Berland and his unruly bunch of followers have been causing problems everywhere they go.

… The FCC has ordered an unlicensed religious broadcaster, Martin K. Elliott of Inyokern, California, to shut down his station.

Broadcasting under the name ‘YHWH,’ Elliott stated that he preached “Old Testament doctrine without any of the erroneous, destructive and confusing traditions of men.”

Referring to himself as a “spiritual Jew,” in one broadcast available on YouTube he explained, “My goal is to magnify and amplify the divine name of YHWH, creator of heaven and earth.”

Elliott says that he had been a Christian for 40 years before YHWH ‘revealed the truth’ to him. He notes that he can document that “tens of millions of Christians have been fooled by the dark side into believing in the so-called god Jesus.”

… An anti-Scientology conference is set to take place in Dublin next week.

Entitled, ‘Scientology: Enough is Enough’, will feature a number of defectors and other critics who will speak out against the destructive cult’s “fraud and abuse.”

Attendance for the two-day conference is free of charge.

Among others, award-winning British journalist John Sweeney, author of the book, Church of Fear: Inside the Weird World of Scientology [Kindle], will speak at the event.

Watch John Sweeney’s full documentaries, Scientology and Me, and Secrets of Scientology.

Also scheduled to speak: Russell Miller, author of the recently re-issued Bare-faced Messiah [Kindle] — considered by many Scientology watchers to be best and most comprehensive biography of Scientology founder L. Ron Hubbard.

The cult, by all accounts except its own dwindling in membership and influence, is currently smarting from Alex Gibney’s documentary Going Clear: Scientology and The Prison of Belief in which former members highlight Scientology’s abusive teachings and practices.

The ‘church’ is in full damage-control mode, but it cannot help but blindly apply its founder’s unethical hate- and harassment tactics.

The Scientology cult has a history of infiltrating schools through various of its front groups.

Often these groups, which promote Scientology’s philosphy and are said to recruit new customers, are not upfront about their association with the Scientology business.

This includes the Citizens Commission on Human Rights, a ironically-named hate group that fights against alleged abuses in psychiatry and psychology; Applied Scholastics, which promotes the use of ‘study techniques’ created by Scientology cult founder L. Ron Hubbard; and Narconon, http://www.apologeticsindex.org/2758-narconon, which uses Scientology’s quackery in its attempts to treat substance abusers.

See the sidebar titled, Narconon’s California Controversy in the story, Revealed: how Scientologists infiltrated Britain’s schools for details as to why parents are right to be upset about the fact that the cultists are given access to their children.

The San Francisco Chronicle, in a May 2014 article, says

The Scientology-linked antidrug program visited classrooms freely for years until 2005, when medical experts and the state Department of Education determined it was promoting bogus science. The alarm went up a decade ago after The Chronicle revealed that Narconon’s antidrug messages to students were based not on medical evidence, according to the experts, but on the practices of Scientology.
– Source: Narconon: Misleading antidrug program back in public schools, San Francisco Chronicle, May 27, 2014

The front group that has infiltrated New York schools is the Foundation for a Drug Free World.

This year’s theme is Children in High-Control Groups.

Founded in 1979, the International Cultic Studies Association (ICSA) is a global network of people concerned about psychological manipulation and abuse in cultic or high-demand groups, alternative movements, and other environments. ICSA is tax-exempt, supports civil liberties, and is not affiliated with any religious or commercial organizations.

The ICSA promotes dialogue between cult experts, and other interested parties, who have a variety of perspectives.

It is a study on the popularization of yoga. Jain says the book’s key messages is “that yoga has been perpetually context-sensitive, so there is no “legitimate,” “authentic,” “orthodox,” or “original” tradition, only contextualized ideas and practices organized around the term yoga. In other words, the innovations unique to pop culture yoga do not de-authenticate them simply because they represent products of consumer culture.”

Asked what she views as some of the biggest misconceptions about yoga, Jain says Selling Yoga “illuminates a number of growing movements that oppose popularized yoga and even sometimes court fear of it.” As a example she refers to the views of ‘some Christians,” which she refers to as the “Christian yogaphobic position.”

Many Christians believe that yoga is incompatible with Christianity.

Another misconception, according to Jain, is “that yoga is definitively Hindu. This idea is based on revisionist histories that essentialize yoga’s identity, ignoring its historical and lived heterogeneity.”

Meant to appeal to a wide audience Selling Yoga is written in an accessible style.