You are here: Home | FLDS | Is the FLDS cult expanding its presence in South Dakota?

… Less than a year after the Fundamentalist Church of Jesus Christ of Latter Day Saints (FLDS) lost its Yearning For Zion ranch to the State of Texas, there are sign that the church, one of many polygamous cults and sects of the Mormon Church,1 is expanding its presence in South Dakota.

Seth Jeffs, a brother of imprisoned cult leader Warren Jeffs,2 is seeking a permit from the state’s Department of Environment and Natural Resources to triple the amount of water the compound may draw by well from local aquifer. 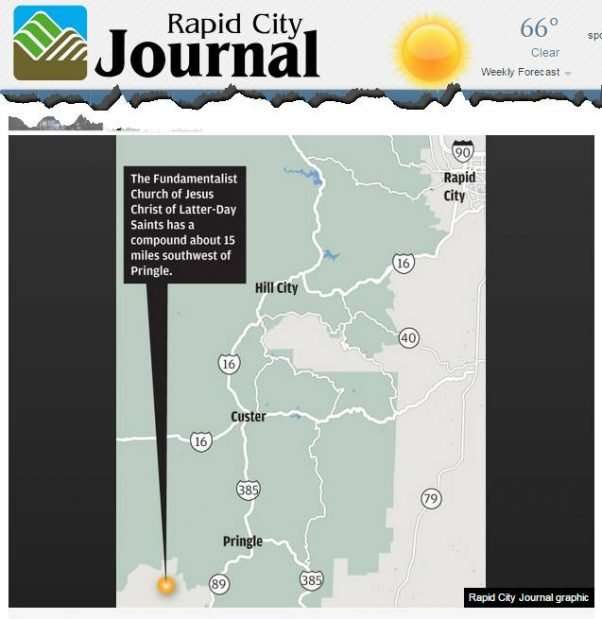 The Pringle, South Dakota FLDS compound, established in 2006, is thought to currently house between 100 and 300 followers.

An estimated 6,000 more live in the sister communities of Hildale, Utah, and Colorado City, Ariz., and some 1,000 more in other enclaves in Colorado and British Columbia, Canada.

A few years ago the group was still estimated to have around 10,000 followers.

But in Utah, the cult’s followers are coming under increasing legal pressure.

In 2005 Utah courts seized control of the FLDS’ property trust amid allegations by state attorneys that Warren Jeffs and fellow cult leaders had mismanaged its assets.

The United Effort Plan trust holds most of the property in the twin towns. Ever since the state took control of the trust, Warren Jeffs has forbidden his followers from paying their property taxes — to-date depriving the trust of more than $4 million.

Meanwhile, the trust if bleeding money, mostly in attorney fees.

Hence state officials have recently started to threaten to evict those who do not pay their property taxes.

Though there is a growing number of people who are no longer loyal to the imprisoned FLDS leader, thousands are still under Jeff’s control.

Observers think he may be planning to order many of them to move to the Pringle, South Dakota compound.

New Temple?
The Rapid City Journal speculates that an excavated area on the cult’s Pringle compound may indicate a feature temple site.

The paper notes that the area is roughly the same size as the temple site at the state-seized FLDS compound near Eldorado, Texas. More about that temple.

At its peak, the group’s El Dorado, Texas ranch housed 700 people. William Hansen, chief of the Water Rights Branch of the National Park Service, says that if the group’s request for more water is approved, the compound would have enough water to serve 4,372 residents.

The National Park Service is one of several organizations and individuals who oppose the additional water permit, but reportedly analysts with the Department of Environment and Natural Resources have recommended the request to be approved.

As was the case in 2006, when FLDS members filed into the then new compound in El Dorado, Texas, neighbors of the Pringle compound also fear a ‘Waco-like scenario.’

While it probably may not come to that, locals are familiar with the fact that Jeffs is serving a life sentence for marrying multiple underage brides as young as 12.

“As locals, we know what is going on in there and we don’t want to see it expand,” one neighboring landowner wrote in opposing the water rights expansion. “We value our 12 year old girls in South Dakota. Help us!”

Research resources on the FLDS