… Destiny Church‘s controversial, self-appointed ‘bishop’ Brian Tamaki last week asked his followers (well, he blamed God for telling him to do so) to shower the stage with high-denomination bills during a church service, boosting church coffers by $100,000.

Quoting the Bible, Tamaki on Twitter referred to the windfall as a “sweet-smelling fragrance that is acceptable to God.” 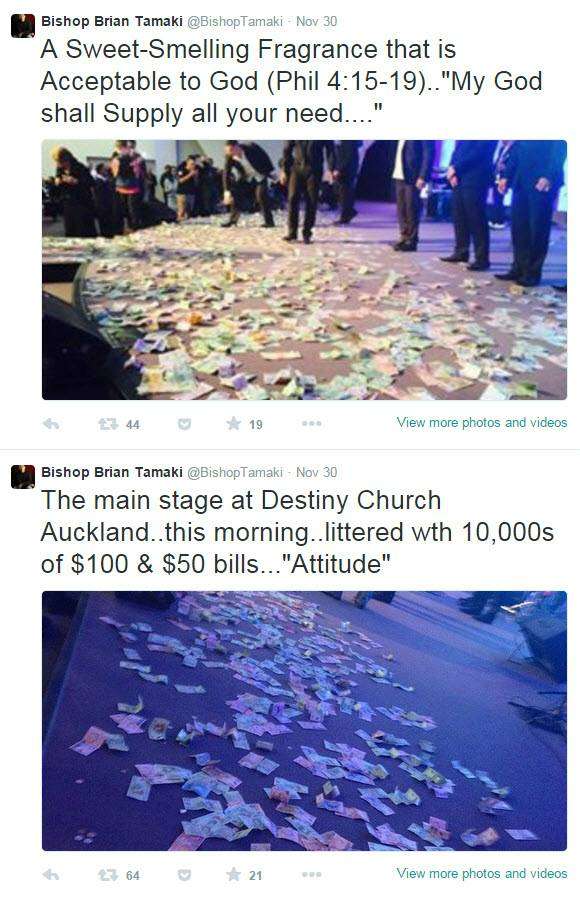 Those who have observed Brian Tamaki’s teachings and behavior for a while now likely have some other, more appropriate Bible verses in mind.

The money event led the Herald On Sunday to editorialize that Destiny Church ‘shows its true object of worship.’

Tamaki pushes the prosperity gospel — as scam in which devotees make you or your ‘ministry’ rich in the believe that they are showing God how much faith they have, so that they too can be ‘blessed.’

He has also been criticized over his heretical teachings.

He demands cult-like devotion, and has urged his followers to join him at ‘The City of God,’ which he is building with their donations.

As Paul Little says, your destiny at Destiny is to pay and pay.

… A former member of Japan’s Aum Shinrikyo doomsday cult, who is awaiting trial, continues to behave as if brainwashed, a social psychologist says.

After 17 years on the run, Katsuya Takahashi — who was arrested in June 2012 — apparently still adheres to the cult’s teaching.

He is facing trial on suspicion of murder in connection with Aum’s 1995 sarin nerve gas attack on the Tokyo subway system.

Takahashi was the bodyguard of Aum Shinrikyo’s cult leader, Shoko Asahara (real name: Chizuo Matsumoto), who is on death row.

“The fear of a cult lies in being unable to be free of brainwashing despite leading a social life for a long time,” Rissho University professor Kimiaki Nishida — who met with Takahashi — said.

Nishida’s assessments of former Aum members have been admitted as evidence in court.

The pope made his remarks in an exclusive interview with Argentine newspaper La Nacion.

On an entirely different note, the article says Pope Francis, who turns 78 on Dec. 17, takes no holiday, usually rises at 4:30 a.m. and maintains an intense schedule.

We may add items to this page throughout the day, but you’re also welcome to check out our Twitter stream.