You are here: Home | Church of the Almighty God | Has Ebola scared away the faith healers?

… Ebola Epidemic: Where are the Faith Healers?

Nigerian skeptic Leo Igwe wonders where all the faith healers have gone now that they are sorely needed: 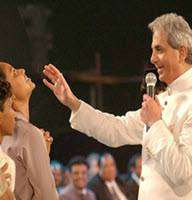 As the governments of West Africa struggle to contain the spread of the Ebola virus, I am wondering where all the men and women of God who claim they can heal the sick and who conduct faith healing sessions in countries across the region are?

Where are all the continent’s miracle workers, now that people desperately need healing; where are the anointed men and women of God, now governments urgently need to contain the spread of Ebola? …

A disease that requires you to put your healing powers to test is here. Where are Africans who believe in miracles and in divine healing and who flaunt this belief as a mark of piety and godliness?

Faith healing is preached and practiced in most African churches, often resulting in fantastic claims of healings and even resurrections from the death — usually without so much as a shred of evidence.

Interestingly, when the Ebola virus first appeared in Nigeria this summer, the country’s health officials contacted megachurch pastor Temitope Balogun (TB) Joshua, whose claims of prophecies and healing miracles have spread throughout the continent.

Why? As Christianity Today explains, people flock to Nigeria from all over Africa to visit Joshua’s Synagogue Church of All Nations (SCOAN), which boasts 50,000 weekly worshipers.

He then airlifted more than 4,000 bottles of anointing water to Sierra Leone, explaining that it contained the power of God and could heal Ebola.

It doesn’t look like Nigeria’s health officials put much stock in TB Joshua’s faith healing claims. Sure enough, there are no reports of healings associated with his anointing water either.

Joshua, one of the richest preachers in Nigeria, is currently also in trouble over the September 12 collapse of a 6-storey guesthouse on his Lagos-based church property. Reportedly 116 people died in the accident.

Investigators say that two storeys had recently been added to the building without reinforcement of the building’s foundations. Joshua, however, claimed that at the time of the collapse a small airplane had circled over the building four times, and that this airplane may have had something to do with the building’s destruction, an event he viewed as a possible attack on himself.

A coroner has now threatened Joshua with arrest if he failed to testify at an inquest into the deaths of 116 people at his church.

… Kidnapped and Tortured by Islamic Extremists

What’s it like to be kidnapped and held captive by Islamic extremists? American journalist Theo Padnos has written a stunning account of the 22 months he spent imprisoned by Al Qaeda-linked terrorists in Syria.

It is both sad and scary to read how some men can engage in prayer one moment, and torture another human in the next one.

Last June five members of the Church of Almighty God beat a woman to death in a McDonald’s restaurant after she rejected their attempts to recruit her.

Also known as Eastern Lightning, theologically the movement is a cult of Christianity — meaning that its doctrines place it outside the boundaries of the Christian faith.

To wit, among other things the movement preaches that Jesus has risen in the shape of a 40-something Chinese woman named Yang Xiangbin, also sometimes known as Lightning Deng.

Sociologically the Church of the Almighty is a cult as well.

Two of the group’s members who took part in the attack were sentenced to death, and since June over 1,000 followers have been arrested.

But as reported by The Telegraph,

members of China’s “house church” movement — an officially illegal but generally tolerated community made up of tens of millions of Christians — claim their members have also been caught up in the police action.

Authorities were “using the crackdown on cults as an opportunity to crack down on house churches,” said one Christian leader from Guizhou province, who asked not to be named. Other Christian leaders said they believed poorly trained police were targeting orthodox congregations they had confused with potentially dangerous cults.

Since the anti-cult crackdown began, there has been a spike in reports of raids on house churches spanning at least nine provinces or regions.

This does not come as a surprise, really, since China has a long history of cracking down on the house church movement, often referring to it as a ‘cult.’