To those who have contacted us: Yes, we know that ‘cult expert’ Rick Alan Ross (who is known for, among other controversies, his vicious and ongoing attacks on cult experts he disagrees with) uses Religion News Blog’s Twitter feed as a source for his own efforts which are then, apparently in a roundabout way, posted to his Twitter stream as well. 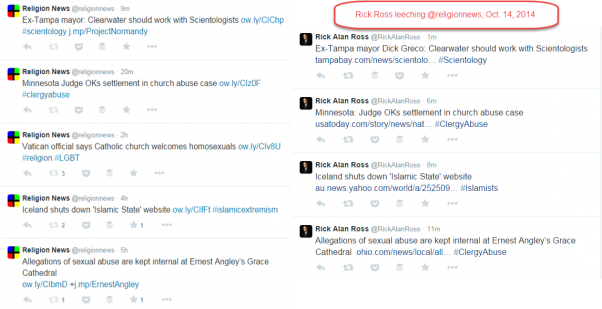 His modus operandi is usually like this: first he retweets something posted by Tony Ortega. Then he cherry-picks links posted by @religionnews, and posts those to one of his websites. It appears those links are then automatically posted to his Twitter stream as well, and later they show up at his Facebook page. He often adds material he finds elsewhere as well.

Some who have reported this form of plagiarism to us say that “Imitation is the sincerest of flattery.” 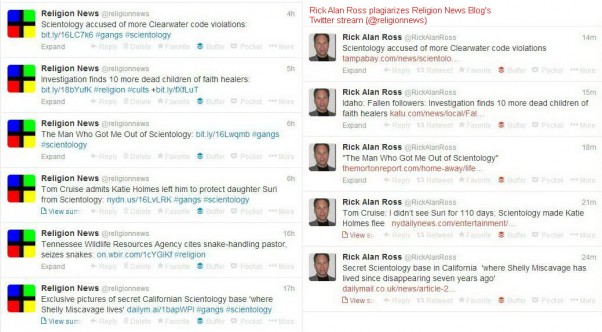 We have documented that Rick Alan Ross plagiarizes Religion News Blog's Twitter stream
Two people jokingly said his behavior reminds them of a statement attributed, wrongly, to Samuel Johnson: “Your manuscript is both good and original. But the part that is good is not original, and the part that is original is not good.” 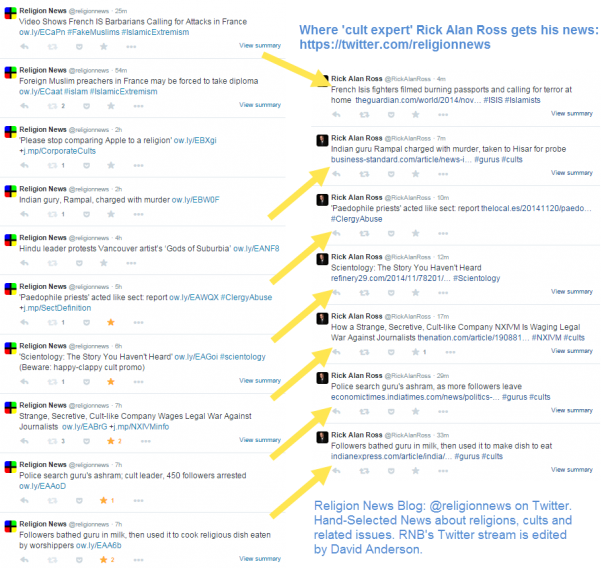 Others have pointed out the hypocrisy of using a source he constantly denounces.

We ourselves find it interesting to note that someone who claims he’s never been busier in his 30 years in the field finds so much time to spend to follow us on Twitter.

Perhaps a lack of time leads him to violate Twitter’s rules regarding plagiarism? (It should be noted that Twitter’s do’s and dont’s apply even to items automatically duplicated from outside sources).

On the ‘positive’ side, you could say we are giving Rick Ross a cult education, one link at a time :)

Nevertheless, his constant copying is one of many reasons we remind people to be careful when selecting a cult expert — and in particular this one.

Not only is leeching other people’s work unethical, but it is also self-destructive, as others may rightly wonder what else has been lifted. 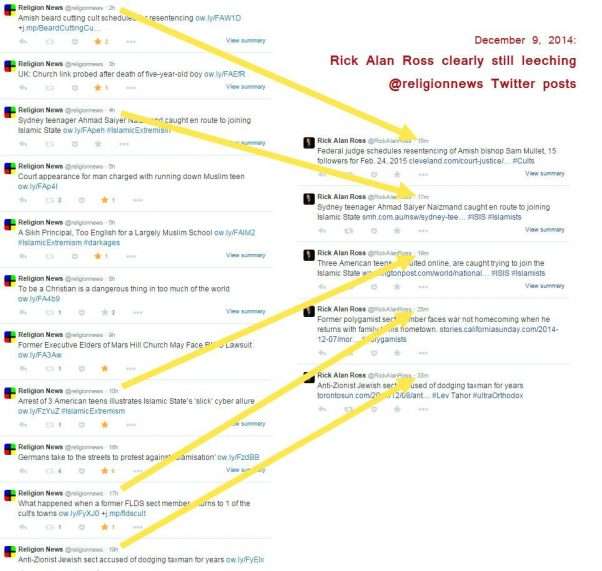 Hint: Stay away from one-man ‘institutes’ or ‘networks’ and carefully research whether someone who declares himself an ‘expert’ is actually accepted as such by, say, the professionals associated with the International Cultic Studies Association.

Meanwhile, join 14,700+ people (and one plagiarist) who enjoy our Religion News Twitter feed: