The Mormon Church is not just theologically a cult of Christianity, but sociologically it often acts like a cult as well. Its members face church discipline, up to possible excommunication, just for speaking out on certain issues.

This has prompted Religion News Service reporter Jana Riess, herself a Mormon, to take an in-depth look at every individual excommunicated by Jesus Christ in scripture.1

Earlier this month Riess wondered whether we’re looking at a Mormon purge, and said

If that’s what is coming for me, so be it. I would be terribly sad to be disfellowshipped or excommunicated from my church — excommunication meaning, literally, out of community.

I’ve been a Mormon for more than twenty years. This is my home, and Mormonism is part of my core identity. I love it.

If the point of these pending excommunications is to strike fear in the hearts of other Latter-day Saints who love the Church but do not always agree with it on matters of social justice, then it has already failed. For Zion’s sake, and for my own, I will not keep silent.

Over at Mormon Coffee — a Christian blog about everything Mormon — Sharon Lindbloom provides more details on the situation, and says that Riess has planted her flag, “choosing freedom of thought and expression over allegiance to the Church.”

Noting that in 1993 there also was a Mormon purge, when a number of people were booted from the church “for publishing scholarly work against Mormon doctrine or criticizing Church doctrine or leadership,” Lindbloom says

If the Church’s current disciplinary actions cause hundreds or thousands of Mormons to more closely examine the Church, its history, and its doctrines, I pray that these people come to find they must abandon the false system of Mormonism. I pray that as they turn away from the Mormon Church they will find love and acceptance in Jesus as He waits for them with open arms.

The Roman Catholic Church is the most activist church in America, the 2012 National Congregations Study finds.

Ex-Muslim Hiba Krisht, 25, adhered to the Islamic dress code throughout her childhood and young adulthood in Saudi Arabia and Lebanon.

But when she came to the U.S., two years ago, she abandoned the hijab.

Last week she started “The Ex-Hijabi Fashion Photo Journal” on Tumblr, “Celebrating body and fashion for those who have broken away from Islamic modesty norms. Because bodies are a joy and not a shame.”

It’s getting lots of attention.

The Presbyterian Church (U.S.A.) — described by the New York Times as “a historic mainline Protestant denomination that spans a broad spectrum from liberal to conservative evangelicals” — has voted at its General Assembly to change its constitution’s definition of marriage from “a man and a woman” to “two people,” and to allow its ministers to perform same-sex marriages where it is legal.

The denomination has ordained openly gay ministers since 2010, but has debated its approach to homosexuality for about three decades.

[As an aside: Why are there so many different churches and denominations?]

The Presbyterian Church (U.S.A.) at its General Assembly also voted (310 to 303) to divest from three multinational corporations — Motorola Solutions, Caterpillar and Hewlett Packard — that it said supply Israel with products that promote violence in occupied Palestinian territories.

There was an audible gasp on the floor in at the COBO Center in downtown Detroit after the motion passed. “In no way is this a reflection of our lack of love for our Jewish brothers and sisters,” Heath Rada, the church assembly’s moderator, told the assembly afterwards.

But opponents described it as exactly that. 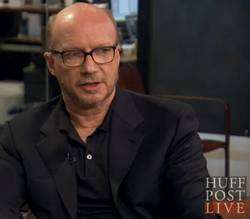 Paul Haggis, the Hollywood film director who resigned from the Church of Scientology in 2009 after 35 years as a member in protest against its opposition to gay marriage, to-date is disturbed as ever about the way those who leave the cult are treated.

In a conversation with the Huffinton Post, Haggis says his personal interactions with former Scientology members has been emotionally troublesome.

In our view the Church of Scientology is a hate group, as well as a destructive cult. Its unethical behavior is based on the writings of the cult’s founder, L. Ron Hubbard — who came up with such policies as ‘Dead Agenting‘ and ‘Fair Game.’

Our tweets-thief is taking a break for a couple of days, but that’s OK since you can get all of @religionnews‘s tweets directly: