The Nebraska Board of Pardons on Tuesday commuted the sentence of former cult member Timothy Haverkamp, who has been on parole since 2009.

Haverkamp was convicted of second-degree murder in 1985 for his role in the cult-related torture and murder of two people near Rulo, Nebraska.

Having agreed to be a key witness in testifying against cult leader Michael W. Ryan and his son, Dennis Ryan, Haverkamp was allowed to plea to lesser charges.

Michael Ryan, a white supremacist, was the leader of a cult-like survivalist group linked to the Posse Comitatus as well as the so-called Christian Identity movement.

The group, consisting of two dozen people, hated Jews and stored weapons in preparation for a final battle between good and evil.

Michael Ryan, known to cult members as the “King,” ordered the murder of James Thimm because he had displeased Yahweh, their god. He is on death row for Thimm’s murder and the beating death of the 5-year-old son of a cult member.

Over four days, Thimm was beaten, sexually abused, sodomized with a shovel handle, shot, stomped and partially skinned while still alive. His fingertips had been shot off on one hand.

The story of the murders was recounted in the book, Evil Harvest: The True Story of Cult Murder in the American Heartland. 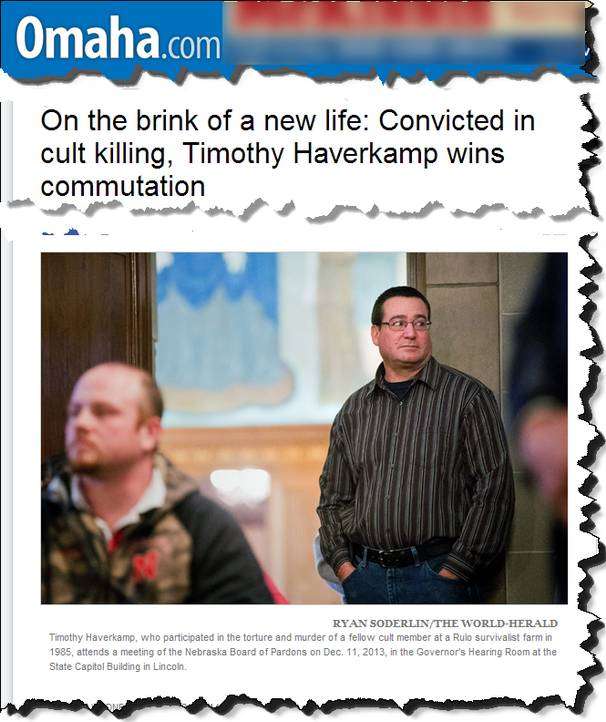 Haverkamp was sentenced to 10 years to life for second-degree murder. The Board of Pardons has now reduced his sentence to a term of 10 years to 58 years, which allows Haverkamp to be released from parole in September.

The attorney general, who has worked in recent years to carry out Ryan’s execution, said there is a clear difference between the cult leader and his followers.

“Tim Haverkamp was a young man who was scared of being hurt if he didn’t do what he was told,” Bruning said. “Michael Ryan is someone who deserves the death penalty, and eventually justice will be served.”