You are here: Home | Islam | West Europe’s Muslims and the Iraq war

No war in their name—but no jihad against the West either
The Economist, Apr. 3, 2003
http://www.economist.com/

Most Muslims in west European countries are fiercely critical of the war. But not so fiercely, their leaders hope and urge, as to be out of step with other critics

“THANK you, Germany,” said one banner as Berlin Muslims last weekend protested against the Iraq war. Like most Muslims in western Europe, they are appalled by it. But there is a hint of a silver lining: so are most Germans, not least Gerhard Schröder, and most west Europeans are against it; and that shared feeling may be bringing together the natives and the Muslim minority.

Not only in Germany, and not before time: the two groups have been drifting apart, especially since September 11th. Germany’s 3.2m Muslims are mostly Turks. But they have felt, and resented, the suspicion as police raid mosques and other Muslim centres to catch Arab terrorists. In the Netherlands too its 850,000-plus Muslims have felt increasingly suspect; especially the many Moroccans, says Mohamed Sini, one of their leaders. But now, he says, relations are improving again, as the native Dutch—mostly against the war, though the prime minister backs it—see Muslims reacting much as they do. 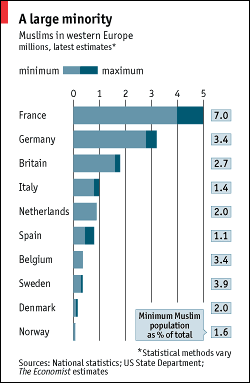 “Here too,” says Lhaj Thami Breze, president of the Union of Islamic Organisations in France (UOIF): “We are proud of Chirac and France.” All the main French Muslim bodies got together as the war began, to congratulate the government on its outright opposition. In Spain, 90% of voters oppose the government’s support for the war. And just as they have seen through its “anti-democratic” lies about the war, claims Mustapha El M’Rabet, president of a Moroccan immigrant body, so too they have begun to realise—he says—that the government has given immigrants an unfairly bad name .

So most Muslims feel just as most other Europeans do? No. They feel it much more strongly. “We’re Arabs and Muslims,” says Mr El M’Rabet, “and we see an Arab, Muslim country being attacked.” Muslims also see it more vividly than most Europeans, on satellite television from Turkish or Arab stations or in e-mailed pictures from the al-Jazeera website. So behind the words of Muslim spokesmen it is easy to detect a deep anxiety to keep Muslim protests within democratic bounds, and visibly in tune with those of the host communities.

Specifically Muslim demonstrations have been notably—and deliberately—few. The Berliners cited above were on their own, but they were only a couple of hundred, whereas tens of thousands of Germany’s Muslims have taken part in protests by the population at large. Britain’s Muslims are as hostile to the war as any others: “A black day in our country’s history”, said the Muslim Council of Britain. But they have carefully kept in line with other anti-war groups, especially since the fighting began and most Britons “rallied round the flag”. London has seen one big Muslim march, but it was the work of an extremist body that most British Muslims disavow. Protests like the plan in Denmark to turn the square outside Copenhagen’s city hall into a vast Muslim prayer meeting on April 4th have been a rare exception.

Equally, Muslim leaders have urged their followers to show restraint. Demonstrate, boycott American goods, fly peace flags, but no violence, said Italy’s Union of Islamic communities; and as for the call for jihad that recently came from Cairo’s Islamist sages—well, it “must be interpreted”. The mosques of France, while deploring the war, have united in an appeal for calm and dignity in response to it. “We want no provocation or extremism,” says a spokesman for the grand mosque in Paris, and even more fiercely Islamist bodies such as Mr Breze’s UOIF echo those words.

What these French Muslims are thinking of is the attack made by some Muslim protesters on some left-wing Jewish ones during a Paris demonstration last month. They know that nothing could discredit Muslims in Europe more than letting their protests earn the label of anti-Semitism. Notably in the Netherlands, Muslims have mostly worked to form a common front with some Jewish and church bodies.

Muslim leaders are likewise eager to damp down views, held by many of their followers, that put Muslims outside the European consensus. They condemn the war: it’s an aggression, a breach of international law, a crime against humanity, they say; it’s about oil or recolonising Iraq or aiding Israel or George Bush’s ego, or whatever. And it is hard to find any Muslims—even if they want Saddam Hussein removed—who think liberating Iraq is really Mr Bush’s aim. But support for the Iraqi president, common enough on “the Arab street”, is almost as hard to find among Europe’s Muslim leaders.

His is “a cruel regime”, say those of Italy. “A dictator,” says Ayhan Tonca, a Turkish-Dutch leader, and the Moroccan-Dutch Mr Sini says it just as readily. Even the outspoken Mr Breze, in Paris, uses the word, though he adds that, as between attacker and attacked, one must back the victim. Young Muslim protesters are tending to wave pictures of Mr Hussein, at times beside ones of Che Guevara, says Mohammed Bechari, leader of a rival French Muslim body—but so are young non-Muslims.

Still more earnestly do Muslim leaders, however sceptical of American motives, refuse to see this as a war of religion. The idea horrifies them. But they fear that it is spreading, on both sides. Religion “is not Bush’s motive,” says Mr El M’Rabet, from Spain, “but he’s using it.” Increasingly, says Shahid Malik, a member of the national executive of Britain’s Labour Party from strongly Muslim Burnley, in northern England, “Muslims see the ‘war on terrorism’ as drifting into a war on Islam.” Listen to both sides’ rhetoric, says the director of Islam and Citizenship in The Hague, and the idea becomes ever harder to rebut. And Iraq’s resistance, says Abu Laban, a Copenhagen imam, could spiral into a war of Muslims “against the United States, maybe the West in general”. In short, jihad.

Inshallah, no. Saddam would love that. It would be bad for the world. For western Europe’s Muslims it could be disaster.