On Wednesday officials with the Department of Public Safety (DPS) and the local Sheriff’s Office met with the remaining residents of the property and provided them with copies of the court orders regarding the forfeiture of the property, a DPS press release says. 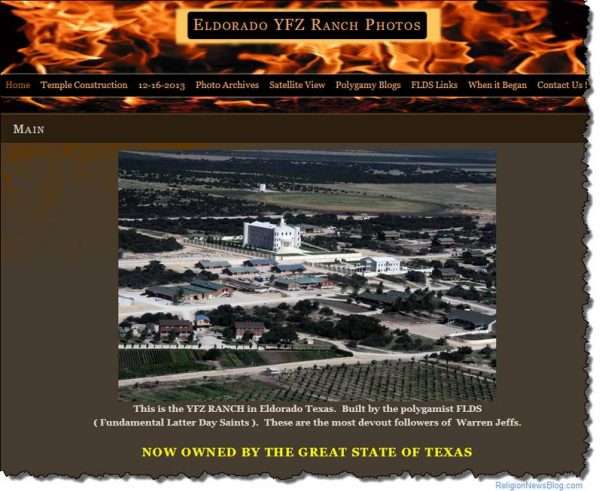 Collection of photos of the YFZ Ranch, by local pilot JD Doyle

According to the DPS press release

Law enforcement personnel are working with the occupants of the ranch to take all reasonable actions to assist with their departure of the property, to preserve the property, and to successfully execute the court order.

Continuing activities on the property will include obtaining a court-ordered inventory of real property and protecting the remaining assets.

Property used in the commission of crimes

Under Texas law, law enforcement can try to seize property that was used to commit or facilitate certain criminal conduct. [See: FLDS cult’s ranch to be seized]

In April, 2008, Texas authorities raided the ranch and took 400 children into protective custody after a phone call to a domestic abuse hotline — later determined to have been a hoax — in which the caller claimed she was abused.

While many people are familiar with the raid on the FLDS’ Texas compound, few know the background, and fewer still understand the full extent of what took place at the Yearning For Zion ranch. In this NBC Dateline program Rebecca Musser tells her story of how she was married to the Prophet Rulon Jeffs then escaped the FLDS. Rebecca was later the key witness in the trials of Warren Jeffs that got him life in prison. Starting at minute 34, the Texas ranch is discussed — including what crime scene investigators found hidden in the FLDS’ temple.

Evidence seized during the raid was used to indict and convict 12 men — including the cult’s leader, Warren Jeffs — for crimes including child sexual assault, bigamy and performing an illegal marriage.

Much of the evidence used to convict the men came from materials seized during a search of the cult’s sacred temple — which is located on the property.

In August, 2011 a Texas jury convicted Warren Jeffs of child sexual assault for taken two underage girls as brides in what his church calls “celestial marriages.” He was sentenced to life in prison plus 20 years.

In legal documents — including a 91-page affidavit, along with a search and seizure warrant — submitted when the State first moved to seize control of the ranch, a law enforcement officer describes how proceeds from illegal activities were used to purchase the ranch.

View Yearning For Zion ranch in a larger map

The State of Texas spent more than $4.5 million on the prosecutions of the FLDS cult members.

Local tax records reveal that the total value of the ranch’s land, which the sect bought for about $1.1 million in 2003, is appraised at more than $33 million.