You are here: Home | abusive churches | Cult leader and brother charged with assault, other crimes

Police in Ontario, Canada last Saturday arrested a cult leader who had not been seen since late 2012, when authorities began investing allegations of physical and sexual assault against him.

After a 16-month investigation, earlier this month criminal charges were laid against the leader of the Church of Jesus Christ Restored, Frederick Madison King, 55, and his brother, Judson William King, 59. 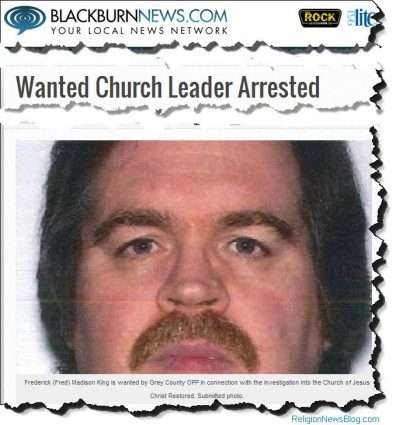 Some of the charges date back to 1978 and involve seven victims, who were all members of the church.

Judson William King was arrested on April 7. He faces charges of assault with a weapon, uttering death threats and four counts of assault.

King and his church have been in the news before.

Rob Gowan, a writer for the Sun Times, in an article published by the Barrie Examiner says

In late 2012, the “cult-like” Chatsworth church was thrust into the public spotlight when Owen Sound resident Carol Christie alleged in media interviews she spent close to 40 years under the brainwashed control of Stan King, then his son Fred.

Her story involved claims of polygamy, historical sexual abuse and missed police opportunities to uncover it. She wrote a book, with her husband John Christie, about her experience called “Property. The True Story of a Polygamous Church Wife.”

None of the allegations have been proven in court.

Christie’s claims, described in this March, 2010 court document, make for difficult reading. They involve horrible beatings all over her body, degradations in front of other church members, spitting in her face, sexual assaults, threats, emotional abuse, et cetera.

It also says that

In 2010 Christie, along with five other people who defected from the church, settled a class action suit.

She says she feels vindicated now that charges have been laid against King and his brother.

Christie’s complaint also named Resto Graphics, a business at which she was forced to work, and says that “Resto and the Church were inextricably entwined in the minds and lives of the members of the Church.”

When Carol Christie fled the cult six years ago, her son Marcus stayed behind. Christie says he was too afraid of the spiritual consequences of abandoning the church and the Prophet’s teachings to leave with her.

The Church of Jesus Christ Restored is a small, sect in the Latter Day Saint Movement. It is located at Concession 2 south of Owen Sound, near Chatsworth, Ontario.

It formed as a fundamentalist offshoot of the Reorganized Church of Jesus Christ of Latter Day Saints (now known as the Community of Christ).

Theologically, all of these churches are considered to be cults of Christianity — which means that their teachings and practices place them outside the Christian faith they claim to represent.

Sociologically most of these churches have cult-like elements as well. 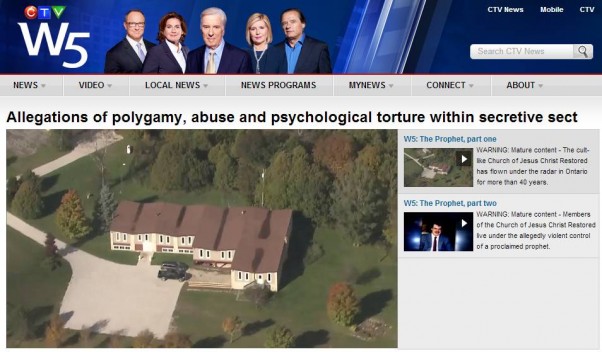 CTV’s W5 covered the allegations of polygamy, abuse and psychological torture at the Church of Jesus Christ Restored in a November 17, 2012 broadcast.