Scientists have concluded that tiny scrap of papyrus dubbed the “Gospel of Jesus’s Wife,” is more likely to be ancient than fake. 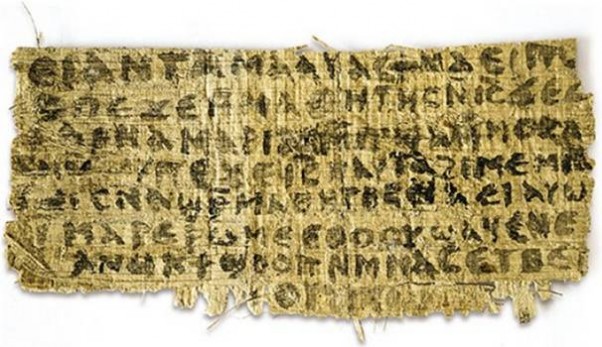 The test results do not prove that Jesus had a wife or disciples who were women, only that the fragment is more likely a snippet from an ancient manuscript than a fake, the scholars agree. Karen L. King, the historian at Harvard Divinity School who gave the papyrus its name and fame, has said all along that it should not be regarded as evidence that Jesus married, only that early Christians were actively discussing celibacy, sex, marriage and discipleship.

“I took very seriously the comments of such a wide range of people that it might be a forgery,” Dr. King said in an interview this week. She said she is now very confident it is genuine.

“When you have all the evidence pointing in one direction, it doesn’t make it 100 percent, but history is not a place where 100 percent is a common thing,” Dr. King said.

The new information may not convince those scholars and bloggers who say the text is the work of a rather sloppy forger keen to influence contemporary debates.

The Harvard Theological Review has published Dr. King’s peer-reviewed paper, along with a rebuttal by Leo Depuydt, a professor of Egyptology at Brown University, who declares the fragment so patently fake that it “seems ripe for a Monty Python sketch.”

When Dr. King first first presented the fragment, in September 2012, her rather sensationalistic announcement (made in Rome, no less) predictably met with lots of criticism.

But it was Dr. Albert Mohler, President of the Southern Baptist Theological Seminary, who put her announcement in perspective. In his article, titled, The Gospel of Jesus’ Wife? When Sensationalism Masquerades as Scholarship, he pointed out that

Karen King, along with Princeton’s Elaine Pagels, has argued that the politically powerful leaders who established what became orthodox Christianity silenced other voices, but that these voices now speak through the Nag Hammadi texts and other Gnostic writings.

Here’s the Smithsonian article Mohler refers to. As Ariel Shabar writes in an update to that article, “As evidence that the real-life Jesus was married, [the papyrus fragment] is scarcely more dispositive than Dan Brown’s controversial 2003 novel, The Da Vinci Code.”

According to the New York Times Dr. King is disappointed that the debate about the fragment has focused on forgery, not on history.

But as Dr. Depuydt points out in his rebuttal, the writing on the papyrus “is a patchwork of words and phrases from the published and well-known Coptic Gospel of Thomas.”

This patchwork is characterized by a certain loss of textual coherence, by minor modifications designed to put a certain spin on delicate modern issues of theology, and by a couple of fatal grammatical blunders. A careful word-by-word juxtaposition and comparison of the text with the text of the Gospel of Thomas reduces the chances that the text is not a somewhat clumsy remix of words and phrases from the Gospel of Thomas statistically to zero. It is therefore clear that the Text is not an independent literary composition at all.

I believe that there can only be one explanation for the complete dependence of the Text on the Gospel of Thomas: forgery. What other motive could there be for taking, for example, the text of the US Declaration of Independence, picking out a few phrases here and there, and changing a new resulting composite text slightly so that it says something different from what the original text says, perhaps even that the British actually won the war?

Why it matters whether or not Jesus was married

Need a refresher on what heresy is?