You are here: Home | Atheism | ‘Satanic’ Craigslist killer; The prophecies behind Syria conflict

Also inside: Why do Newsweek’s new owners try to hide their ties to a controversial ‘Christian’ preacher? Is this a good television moment for atheists? Plus: In Iran, not wearing the ‘proper’ veil can get a woman arrested by the country’s religious police. Yes. Religious police.

May be updated throughout the day…


Miranda Barbour, a 19-year-old woman who told a reporter she has murdered upward of 22 people in several states, was in a Pennsylvania court yesterday for a pre-trial hearing.

She and her husband, Elytte Barbour, 22, are accused of killing 42-year-old Troy LaFerrara, who police say responded to a “companionship” ad placed by Miranda Barbour on Craigslist.

She is accused of repeatedly stabbing LaFerrara while her husband, who had been hiding on the backseat floor under a blanket, restrained him with a piece of television cable around the neck.

In a second jailhouse interview Barbour, referred to in the media as the “Craigslist killer,” says that other men also responded to her ad but escaped death when they failed to show up. But she also said she has murdered “some people” locally — a claim local police say is hard to believe since there aren’t that many missing person cases, and no other evidence has been found.

The woman has also claimed that at the age of 13 she joined a Satanic cult. In response The Church of Satan released a statement on what they say is Miranda Barbour’s claimed involvement in their church, saying it has no record whatsoever of any contact with Miranda and her husband.

Miranda’s father says his daughter is the most manipulative person he knows and is a liar. Ashley Dean, her sister, concurs. She told Pennsylvania newspaper The Daily Item that Miranda is using her fascination with television serial killer “Dexter” to embellish her own story.

“She is lying,” Ashley Dean said of her sister, Miranda Barbour. “She is a master at lying. She takes a lot of truths and puts the lie in the middle so when people talk to her they see all these truths and then they believe the lie.

A prison guard who supervised the initial visit of Daily Item reporter Francis Scarcella says details related to Barbour’s claim of having killed “under 100 people” made her sick to her stomach.

At Tuesday’s hearing Judge Charles H. Saylor deferred ruling on a defense motion to throw out the mitigating circumstances that would allow prosecutors to seek the death penalty if she’s convicted of murdering LaFerrara.

Would you be surprised to learn that the conflict in Syria was all foretold in 7th Century prophecies?

For Muslims the hadith, the collected sayings of prophet Muhammad and his companions, are the most important sources of authority in Islam after the Quran itself. These sayings include accounts which refer to the confrontation of two huge Islamic armies in Syria, a great battle near Damascus, and intervention from the north and west of the country.

After Mohammad died, in 632, Islam split into Sunni and Shi’ite sects during a war over the succession of the faith’s leadership.

In the minds of many Westerners, Shiite became synonymous with radical Islam after the 1979 Revolution in Iran. In reality, there are extremist strains among both Shiites and Sunnis, which do not necessarily represent the views of mainstream Muslims.
– Muhammad’s death precipitated Sunni-Shia rift

Reuters notes that Shi’ites, who represent about 10% of the Muslim population,

are drawn to the war because they believe it paves the way for the return of Imam Mahdi – a descendent of the Prophet who vanished 1,000 years ago and who will re-emerge at a time of war to establish global Islamic rule before the end of the world.

In August 2013, IBT Media bought Newsweek. At the time, Christianity Today and Buzzfeed pointed out that IBT has links to “the Community,” a Christian sect led by a charismatic — and controversial — Korean pastor named David Jang.

Now Mother Jones wants to know why Newsweek’s owners are so anxious to hide their ties to Jang.

Ben Dooley’s report is the result of a multi-year investigation.

Among other thing, Dooley point out that Jang sees Community-affiliated media organizations as an essential part of his mission to build the kingdom of God on Earth. 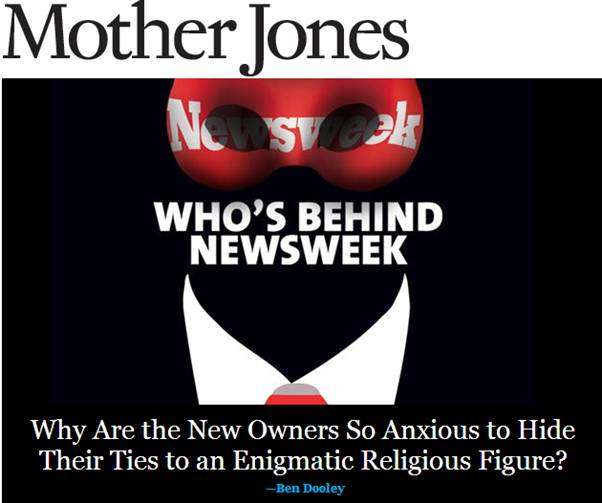 In case you hadn’t noticed, this is a “relatively good moment for atheism and skepticism on the small screen,” says Alyssa Rosenberg, who writes on culture and politics for the Washington Post.

Beard-cutting-cult leader Sam Mullet is challenging his hate-crimes conviction that netted him a 15-year prison sentence for orchestrating a series of beard-chopping attacks on other Amish he disagreed with.

In Iran, a volunteer citizens’ militia, the Basij, together with what are called the “guidance” police, patrol the streets to monitor whether people are properly observing Islam’s many do’s and don’ts.

The experiences of a friend, who was pulled off the street and held at a police office for not wearing a proper veil, Hossein Fatemi — an award-winning Iranian documentary photographer who splits his time among Afghanistan, Iran and the United States — to put together this art project.

By the way, did you know that religious police can be found in nearly one-in-ten countries? 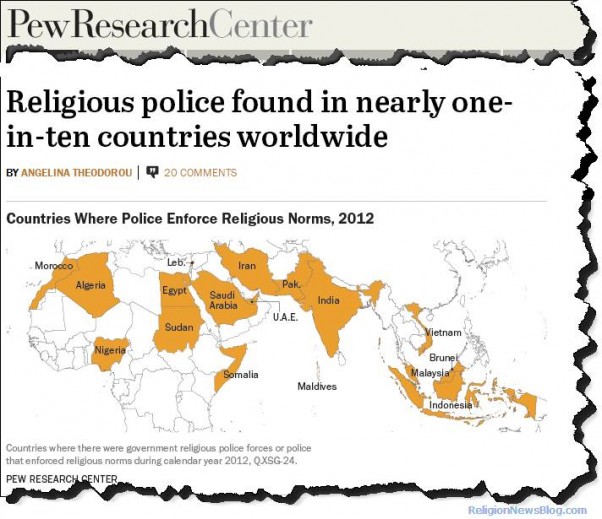 As of 2012, at least 17 nations (9% worldwide) have police that enforce religious norms, according to a new Pew Research analysis of 2012 data.

Religion News Blog brings you expert-selected, hand-picked religion news articles with a focus (though not always exclusively so) on cults, religious sects, world religions, and related issues (think anything from alleged brainwashing to human right issues, and from abusive churches to offbeat news)