Today is Khordad Sal, the birthday of Zoroaster (also known as Zarathustra), the founder of Zoroastrianism — an ancient Iranian religion and philosophy.

On this day in 1997, police discovered the bodies of 39 people inside a mansion in Rancho Santa Fe, near San Diego, California.

A charismatic former music teacher and 38 of his followers, all members of a religious cult called Heaven’s Gate, had killed themselves in order to hook up with a UFO that would transport them to heaven.

To date it remains the largest mass suicide to have taken place in the US.

ABC News broadcast on the 10th anniversary, in 2007, of the Heaven’s Gate suicides

Justices on the US Supreme Court are tackling the question of whether a private company can get out of a federal law by citing the religious beliefs of its shareholders.

These three articles provide good, readable overviews. Just pick one to understand what this important case regarding religious exemptions is all about:

Religious exemptions — a guide for the confused

And a bonus link: Sects and Drugs — Trying, and failing, to catch Justice Scalia in a contradiction: 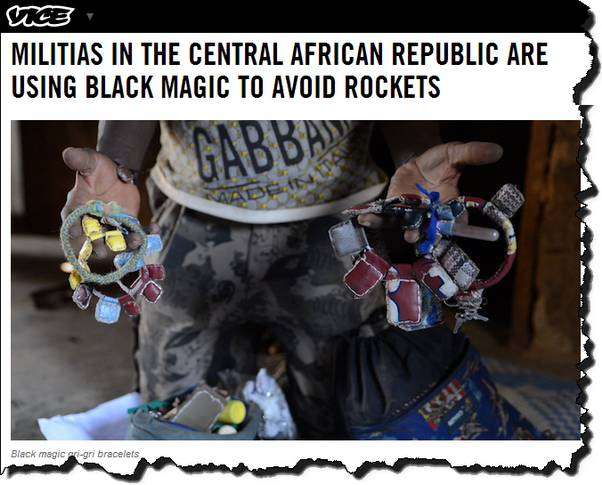 According to Wikipedia, a Grigri (or GriGri, Gri-gri or Gris-gris) is an assisted braking belay device designed to help secure rock-climbing, rappelling, and rope-acrobatic activities.

Interestingly, Gri-Gri also is the name for a necklace made out of large leather squares, an ornament worn for its alleged ability to protect believers in black magic.

Online magazine VICE quotes the leader of a ‘Christian’ militia group in the Central African Republic: “It’s better than body armour. When I wear it, bullets and machetes can’t touch me. Even rockets can’t kill me.”

It would normally strike us a a funny anecdote in this very informative article. But as the write notes:

Magic in the Central African Republic seems a lot like a religion in itself, in that people use their faith in gri-gri as a kind of security blanket — a distinctly make believe presence that keeps them courageous when they should be fearful. But while there’s nothing wrong in relying on your religion for personal strength, it’s a little harder to endorse shaman swindlers who charge militias a small fortune for something that’s going to give them extra confidence while they’re slaughtering a bunch of innocent men, women and children.

If you’re not familiar with the tragedy taking place in the Central African Republic, read this.

More history: On this day in 1830, Joseph Smith published “The Book of Mormon,” which he claimed to have translated from golden plates the Angel Moroni helped him find.

He wanted people to believe that the golden plates were written in “reformed Egyptian” and which he translated with the help of two stones, the “Urim and Thummim.”

Perhaps that is why the book, which claims to be another testament of Jesus Christ, is so full of inconsistencies and other errors.

Yet Smith, founder of the Mormon Church, claimed that The Book of Mormon was “the most correct of any book on earth, and the keystone of our religion, and a man would get nearer to God by abiding by its precepts, than by any other book.”

Christians, however, reject the Book of Mormon, as well as Doctrine and Covenants, and The Pearl of Great Price (also Mormon Scriptures) — in the first place because they consider the Bible to be the only legitimate written, revealed Word of God.

Aside from that, the Mormon scriptures have significant problems. Not only do they contradict the Bible, but they also include numerous errors, have frequently been edited and updated, and contain plagiarized material.

The Mormon Church, meanwhile, is seen as theologically a cult of Christianity — a religious movement that, while claiming to be Christian, falls outside the boundaries of the Christian faith.

Spiritual warfare is a Biblical concept, but nowadays some Christians teach and practice it in ways that are extra-biblical and/or unbiblical — to say the least.

This is especially true of teachers and preachers who consider themselves to be modern-day apostles and prophets.

They are part of the so-called New Apostolic Reformation movement — a movement that misuses Bible passages in support of what, essentially, appears to be a ‘Christian’ role-playing game.

In some cases we use a stronger term in reference to the nutty stuff that comes out of this movement: religious insanity.

Here’s a case in point, as reported by The Raw Story:

An Oklahoma pastor this week said that his attempt to remove demons from the United States had worked a little too well, causing a severe drought to turn into massive flooding.

In an appearance on the Christian Internet broadcast Generals International, Church on the Rock Pastor John Benefiel recalled how he had used a “divorce decree” to severe Baal’s hold on drought-stricken states like Texas and Oklahoma.

You have to see it to believe it.

John Benefiel talks about a Baal divorce degree — an exercise in exorcism meant to divorce the United States of America from the ancient pagan god Baal.

People like John Benefiel hijack genuine, Biblical Christianity and turn it into a poor substitute: a fantasy role-playing game that has no winners.