Raelians believe that life on earth was created by extraterrestrials called Elohim, who will one day return to earth to judge humanity.

Founder RaÃ«l (real name: Clause Vorhilhon), claims the Elohim created us in laboratories using their own DNA, and says we will soon be able to clone ourselves as well.

Matter of fact, in 2002 the sect claimed to have produced the world’s first cloned baby.

According to RaÃ«l’s beliefs, cloning would make reproduction through sexual intercourse unnecessary and outmoded, which is why he teaches that the purpose of sex is purely pleasure.

Sexual pleasure is extremely difficult or even impossible for women who have been subjected to Female Genital Mutilation (FMG), a cruel practice that involves “partial or total removal of the external female genitalia or other injury to the female genital organs for non-medical reasons.”1

In response to this practice — which occurs around the world, but particularly in Africa — the Raelians in 2008 decided to build a hospital in the West African country of Burkina Faso, where women could come to have their clitorises “reconstructed.”

The ‘Pleasure Hospital’ was built by Clitoraid, a Las Vegas-based charity founded by wealthy Raelians and backed by the International Raelian Movement.

The hospital was supposed to open earlier this month, but though country — the poorest in Africa — has allowed the hospital to be built, the government has refused to allow it to open. 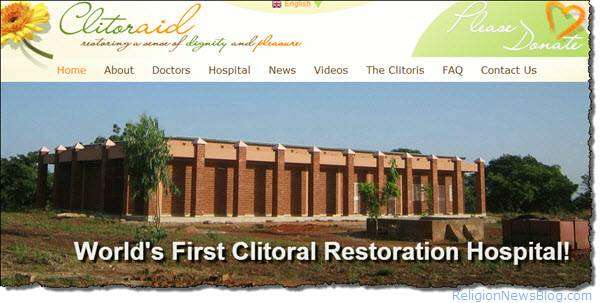 A team of American doctors have still been able to perform surgery on a few dozen women, using a different clinic. But the government of Burkina Faso has now also cancelled their work permits.

Clitoraid says it has submitted all the necessary paperwork, but the Ministry of Health now says there was a problem with the deadlines.

And that while Burkina Faso’s first lady, Chantal Compaore, was schedulted to attend the March 7 inauguration of the hospital.

Video posted last month by Clitoraid, announcing the March 7, 2014 opening of the hospital

Clitoraid says that the country’s about-face comes after

an influential doctor who is a member of a powerful Catholic organization in Burkina Faso wrote an extremely defamatory letter where he announced that the Ministry of Health and the Governor had been beseeched in order to prevent the opening of the center, simply because of Clitoraid’s affiliation with the Raelian Movement.

The Independent writes that French-Canadian doctor Brigitte Boisselier, a prominent RaÃ«lian and president of Clitoraid (and, way back when, also president of Clonaid — the laboratory that claimed it had produced a cloned baby) blames the “Catholic Church and its cronies, who are conducting a smear campaign against our wonderful mission for their own selfish motives.” The Catholic Church in Burkina Faso has dismissed this as “poisonous rumour”.

Fact is that the Raelian Movement and the Catholic Church do not see eye to eye.

But The Independent notes:

An official at the Health Ministry tells me that the opening was cancelled because Clitoraid had not provided essential documents. All of which sounds reasonable until the Health Minister tells another journalist that “medical organisations should be focused on saving lives and not advertising their religion in an attempt to convert vulnerable people”.

The BBC says that Banemanie Traore — a local member of the hospital organizing committee, and a Raelian is convinced that the Ministry has stepped in to stop the project for religious reasons. She says powerful Catholics in the country have put pressure on the government. “They don’t want women to have pleasure,” she says.