You are here: Home | Catholic Church | Mormon head ordered to appear in court over ‘fraudulent’ doctrines

Inside: items on Scientology, the International Cultic Studies Association, the Plymouth Brethren, the Book of Mormon vs DNA, and more (including a modicum of opinion, as well as links to related research resources)

Thomas S Monson, president of the Mormon Church1 has been ordered to appear before a British magistrate’s court after a former Mormon complained that some of the church’s teachings amount to fraud. 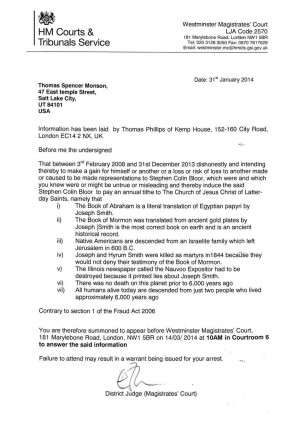 Contrary to what the Telegraph writes, the MormonThink website is not involved in the case.

Rather, it merely reports on it — for instance by posting two different summons on behalf of two people who have managed to convince a judge to sign a formal summons warning Mr. Monson that a warrant for his arrest could be issued if he fails to appear for a hearing on March 14.

Monson, whom Mormons consider to be God’s prophet on earth, says he won’t show up.

Theologically the Mormon Church — which has usurped, twisted and changed key doctrines of the Christian faith — is considered to be a cult of Christianity.

Despite its claims to the contrary, it is not a part of the Christian church, and its members are not Christians in the biblical sense of the term.2

Downward facing Alpha dogs: The mindful rise of the new tech humanists: Interesting article from Fast Company, which says “In this time of inner-peace seeking, meditating, chia-seed-chomping CEOs, there is a new movement of tech humanists emerging. Can they bring a sense of calm to the digital chaos — and win back fans in the process?”

The Committee on the Rights of the Child, a United Nations panel, has issued a sharply critical report on the Catholic Church’s handling of child sexual abuse cases involving clerics.

The report — which you can read or download here — also includes criticism of the Church’s teachings on homosexuality, gender equality and abortion.

The Vatican has hit back, accusing the U.N. of interfering with church teachings on the dignity of the human person and in the exercise of religious freedom.

The International Cultic Studies Society (ICSA) has launched a remodeled version of its website. Its a vast improvement over the old version.

Founded in 1979, the International Cultic Studies Association is the primary network of lay and professional cult experts. The world’s largest secular cult-information organization, it is one of the professional organizations recommended by the publishers of Apologetics Index, the parent site of Religion News Blog.

The field of cultic studies is populated by a plethora of people who don’t necessarily see eye-to-eye on all issues related to controversial religious movements.

For instance, there are counselors who do their best to help people leave cults, and the deal with the aftermath of their bad experiences in high-control movements. On the other hand there are people who have become known as ‘cult defenders’ or ‘cult apologists’ due to their sometimes naÃ¯ve, and often overly friendly views of such movements.3

In between are people with a range of opinions and approaches. Some deal with ‘cults’ from a theological perspective, some from a sociological angle, and others from both.4

Then there are the ‘also-rans’ — loners who confuse muck-raking, illegal approaches to deprogramming, bluster and/or outright attacks on cult experts for effectiveness in the field. Despite the often pompous names under which they labor, their sound-bytes do little to educate the public on cult-related issues.

ICSA’s approach, which even among its long-time membership is not always without a measure of controversy, is best explained in Dialogue and Cultic Studies: Why Dialogue Benefits the Cultic Studies Field.

The article, authored by the ICSA Board of Directors, was published in the most recent issue of ICSA Today5

Bottom-line: ICSA believes that the issues it studies are complex and multidisciplinary and, consequently, demand an openness to the expression and consideration of diverse viewpoints. ICSA believes that such dialogue is a vital part of the pursuit of truth.

We encourage you to support ICSA.

England’s Charity Commission last month decided to register a Plymouth Brethren church meeting hall as a charity — a decision that, combined with another case, have made many question whether the public benefit test has any substance.

The Plymouth Brethren is an unofficial but widely used designation for a conservative, fundamentalist movement rooted in the British Isles. Members of this loose grouping of churches refer to themselves simply as “Brethren” or “Christian Brethren.”

An extremist sect of this movement used to be called — by outsiders — the Exclusive Brethren. In 2012, this cult-like group renamed itself Plymouth Brethren Christian Church — in an apparent effort to sow confusion about its true nature and origins.

Small wonder, given all the negative publicity this high-control movement has attracted over the past few decades.

Even the Charity Commission isn’t blind to the problems associated with this group. As Civil Society Media writes:

In the Plymouth Brethren case the Commission found that the doctrine and practices of the Brethren caused “detriment and harm” to family members who are physically separated during disciplinary processes, and to individuals and their children who are unsupported when they leave the church. It also concluded that these practices may have adverse consequences for the wider community.

But despite concluding that these ‘disbenefits’ were “in real danger of outweighing” the benefits arising from the Brethren’s religious activities, the Commission nevertheless decided that the public benefit test had been passed.

England’s tax-payers are right to question whether the Charity Commission is functioning correctly, as it appears that no-expenses-spared lobbying on the part of this destructive religious movement paid off.

Here’s a revealing documentary (Australia, 2006) about the Exclusive Brethren:

From the “You Don’t Say!” department:

The head of Saudi Arabia’s religious police – the “mutawa” – has admitted the force contains some extremists, and has promised to remove them.

Also known as the Mutaween, the Islamic religious police force is responsible for the enforcement of sharia — the stifling Islamic law that covers every aspect of a Muslim’s life — in some Muslim-majority countries.

Adidas has asked Germany’s FC Bayern Muchen players it sponsored to certify that they were not members of the Scientology organization. Here’s a Google translation in case your German is rusty.

As in so many countries, Scientology is not respected — to say the least — in Germany. At one point the German Embassy in Washington, D.C. carried an article in which the official German viewpoint on Scientology was explained. It started of by saying

The German government considers the Scientology organization a commercial enterprise with a history of taking advantage of vulnerable people and an extreme dislike of any criticism.

Joseph Smith, the founder of the Mormon Church, once said:

“I told the brethren that the Book of Mormon was the most correct of any book on earth, and the keystone of our religion, and a man would get nearer to God by abiding by its precepts, than by any other book.”

Yet no-one who has seriously studied the Book of Mormon can deny that it faces countless intractable problems.

In its article, Mormon Church Claims DNA Studies Can’t Affirm or Reject Book of Mormon, Religion Dispatches addresses the LDS Church’s latest efforts to defend the book against its critics.

Here’s a video explaining the problems:

Should you pray about the Book of Mormon? (Mormon missionaries ask you to do so…)