Also inside: Doctors not liable for death of Jehovah’s Witness • Which one of these women is dressed most appropriately for public places? • The pope, Coronation Street, Cow Urine, Muslim Terrorists, and more…

A young woman who joined a cult-like church in Texas, after reportedly ‘running away’ from her home in Arkansas, was spotted in public Sunday.

The parents of Catherine Grove, 26, claim that their daughter has been brainwashed by the leaders of the Church of Wells, a 57-member congregation in the tiny town of Wells, Texas.

The young woman disappeared from her home in Fayetteville, Arkansas on July 2 last year. She called home three days later.

“When she first called us on July 7, it was 11:30 at night, she said, ‘I’m in Wells, Texas, I’m with a group of people that are taking good care of me, but Mom and Dad I can’t listen to you any more, I have to keep my hands over my ears and I can only listen to my ‘elders,’ and that was alarming to us,” her mother told a reporter.

Since that day, Catherine has cut off almost all contact. Her parents, who have moved to Wells, say that the church’s leaders will not let them meet with her away from the church and its members. They have not seen or heard from their daughter since October.

Law enforcement officials have looked into the case, and have concluded that the church’s members and officials have broken no laws, and that Catherine is a member of the church of her own free will.

On Sunday, police visited the site of wedding in a nearby town after a report was called in saying that someone there had a gun. They instead found Catherine’s father, who thought he might have a change to see his daughter away from the church’s property.

However, he was asked to leave the rented property. An officer then spoke with Catherine, and he told local TV station KTRED that he observed and described her body language as uncomfortable.

The publishers of Religion News Blog consider the Church of Wells to be theologically a cult of Christianity. Sociologically, the group appears to be cult-like in that its leaders have positioned themselves into high-control authorities.

Interview with a former Church of Wells member [part 2]

What is a cult of Christianity?

What you should know about brainwashing and mind control

Doctors not liable in death of Jehovah’s Witness

The Michigan Court of Appeals has ruled in favor of doctors in the case of a woman who died after refusing a blood transfusion because she was a Jehovah’s Witness.

Many, though certainly not all, Jehovah’s Witnesses don’t accept blood transfusions because the Watchtower Society — the organization they belong to (which, as the ‘Governing Body’ claims to represent God on earth) — misinterprets several Bible verses.1

The woman’s estate sued several physicians and a hospital, claiming that medical malpractice led to the need for a blood transfusion. A judge dismissed the case, and the appeals court upheld that decision.2

The vast majority of Christian denominations consider the Watchtower Society to be, theologically, a cult of Christianity.

The high-control organization is also viewed by many as a cult in the sociological sense of the word. 3

Which one of these women is dressed most appropriately for public places?

That survey question was asked in seven nations with a Muslim majority in the Middle Eastern Values Study conducted in 2011 and 2013 by the University of Michigan. The countries are: Egypt, Iraq, Lebanon, Pakistan, Saudi Arabia, Tunisia, and Turkey.

The accompanying photos showed five styles of Hijab4, and one woman whose face and hair remained completely uncovered:

The Pew Research Center summarized the ‘veil portion’ of the study (of which the full title is, The Birthplace of the Arab Spring: Values and Perceptions of the Tunisian Republic in a Comparative Perspective). But the Daily Mail had a better-looking graphic: 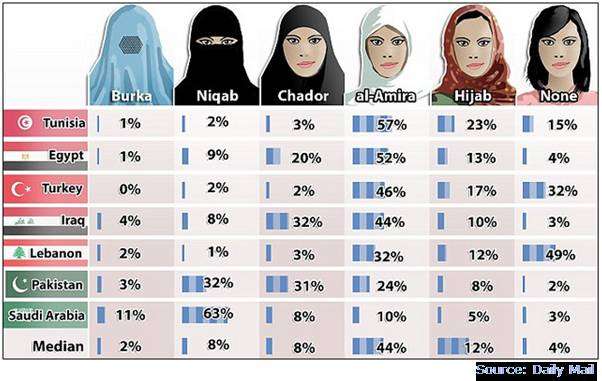 Note: there is a greater variety of Muslim veils than shown in the study. Also, not each style of veil has the same name throughout the Muslim world.

As ever-growing numbers of Muslims have moved to Western countries, where Muslim veils often are viewed as anything from a ‘symbol of oppression’ to an ‘illegal disguise,’ the garments have been the subject of much discussion and even legislation.

Muslim veils, from Hijab to Burqa