A couple from Albany, Oregon, is facing first- and second-degree manslaughter charges in the death of their 12-year-old daughter, who died of type 1 diabetes on February 5 this year.

Travis and Wenona Rossiter, who were arrested on August 29, are accused of only praying with Syble Ann Marie Rossiter and not providing her with adequate medical care.

The couple appeared in court last Friday and were scheduled for a final resolution conference on Feb. 19, 2014.

In August Albany Police Capt. Eric Carter told a local news station he was informed that Syble would have survived if she had received medical aid.

The Rossiters are members of the Church of the First Born, in Brownsville, Oregon. 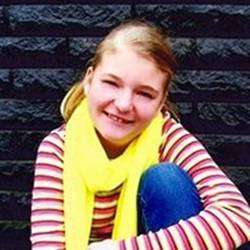 Syble Ann Marie Rossiter
The church eschews modern medicine in favor of faith healing.
It is part of a network of more than 100 such churches in 20 states. The churches — whose teachings on the subject of faith healing are considered un-biblical — are linked to many preventable deaths.

While church officials have been known to say that members are free to seek medical aid, former members report that those who do so are considered ‘weak in faith’ ( and are said to have sinned against God by demonstrating a lack of faith), and subsequently tend to be shunned. 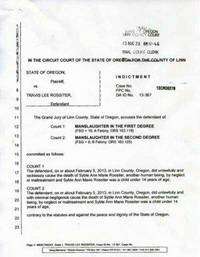 Grand jury indictments against Travis and Wenona Rossiter
In 1996, a jury convicted Church of the First Born member Loyd Hays, Wenona Hays Rossiter’s father, on charges of criminally negligent homicide. When his 7-year-old son was dying of a treatable form of leukemia, Hays — whose wife was acquitted — tried to cure him through prayer.

The Albany Democrat-Herald says that in 1981 an 8-month-old aunt of Wenona Rossiter had an abnormal increase in brain fluid that causes the skull to swell. After a 7-month legal battle in which the family sought to keep her from getting medical treatment, the girl eventually underwent court-ordered surgery.

Largely in response to a series of preventable ‘faith-healing’ deaths at another ‘faith instead of medical care’ denomination, Followers of Christ Church, the Oregon legislature a few years ago changed the law regarding faith healing.

House Bill 2721, which went into law June 9, 2011, eliminates reliance on spiritual treatment as defense to certain crimes in which the victim is under 18 years of age. Effectively it means a reliance on faith healing can no longer be used as a defense against manslaughter charges.

Nonbelievers celebrate seasonal holidays as well. Atheists, agnostics, humanists, skeptics, rationalists, freethinkers, nontheists and other nones simply ignore the essence of Christmas, and instead join each other in celebrations that include singing Christmas carols (“Do You Hear What I Hear? doesn not mention Jesus Christ”, candles, food, and sermon-like stories.

The idea behind the celebrations is, says the New York Times, to replace the stereotype of the “angry atheist”.

The paper cites a recent study by the Pew Research Center’s Forum on Religion and Public Life that shows one-fifth of Americans do not identify with a religion, while a third of those under 30 have no religious affiliation.

Nine in ten Americans celebrate Christmas, and 73% say they believe Jesus was born of a virgin. But Pew’s Christmas survey shows that only about half of all Americans see Christmas mostly as a religious holiday, while one-third view it as more of a cultural holiday.

Father Michael Sliney is in the business of saving the souls of wealthy businessmen. He does not have a parish, but works with the Lumen Institute, a Catholic organization that “provides highly personalized formation for leaders”.

What is formation, you ask?

Sliney, who wants to “bake spirituality into busy people’s lifestyles,” says his mission is to “help business leaders develop a relationship with Christ in a way that is realistic.” In personal meetings, email messages and via social media — but always briefs and to-the-point — he encourages busy executives to raise their ethical standards, love their wives, and be committed to their children.

The son of a wealthy Ford executive, he tells Washington Post columnist Thomas Heath how he has found a way to reconcile Catholicism with the wealthy businessmen he counsels.

Interesting detail is that Sliney’s order is the controversial Legion of Christ.

Religion is good for business, says a forthcoming paper by the University of Toronto’s Rotman School of Management.

The study found that businesses with head offices in places with high levels of “religiosity” were less likely to experience stock price crashes as a result of not disclosing bad financial news. And it didn’t matter whether those at the top were religious or not. Just being in a town where social norms are influenced by religious codes of behaviour was enough to rub off on the companies operating there.

Note: a religious setting tends to foster more whistleblowers within a corporation.