Televangelist Paul F. Crouch who along with his wife Janice founded the Trinity Broadcasting Network — the world’s largest Christian television network — has died at the age of 79.

The controversial preacher had suffered from degenerative heart disease for a decade.

Many Christian leaders have praised Crouch for creating what the Encyclopedia of Evangelicalism calls “one of evangelicalism’s most successful and far-reaching media enterprises” — a platform from which many ministries have been able to spread the gospel worldwide. 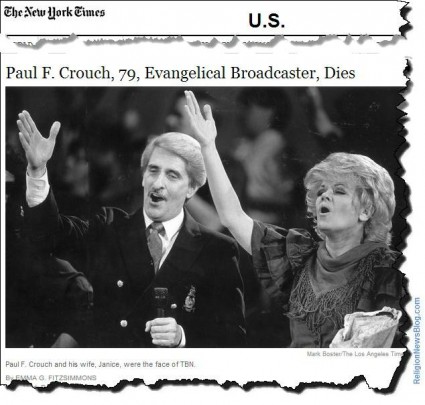 What started with the purchase of one television station in Santa Ana, California, in 1973, has grown into a conglomerate with 84 satellite channels and more than 18,000 television and cable affiliates.

But while many legitimate Christian ministries appear on TBN, the station also promotes such an incredible amount of unsound and offbeat teachings — ranging from the ‘merely’ aberrational to the outright heretical — that it is often referred to as “The Blasphemy Network.”

Some of TBN’s most outrageous teachings have come straight from the mouths of Paul and Jan Crouch.

Crouch, who with his wife lived extravagantly — using TBN’s multimillion-dollar private jets and more than two dozen ministry-owned homes — was a prime pusher of the so-called Prosperity Gospel.

According to this controversial, unbiblical teaching, God cannot and will not bless someone until that person first donates money to him — usually by giving it to whichever teacher promotes the scam. (Remember, if it worked as advertised, the televangelists would be donating money to you, instead of the other way around).

Spending money on things other than evangelism is not a problem for TBN.

But it can lead to problems.

In 2012, granddaughter Brittany Koper, who had been the network’s finance director, went public with detailed allegations of fiscal improprieties, including excessive salaries, four-figure expense-account meals and a $100,000 mobile home for Jan Crouch’s dogs paid with tax-exempt donations.

Koper’s accusations were widely covered by the mainstream press, as was a charge by her sister, Carra Crouch, who said she was raped by a TBN employee and forced by her family to cover up the crime.

The family disputes were the latest in a series of embarrassing events over recent years, including news reports in 2004 that Crouch had paid a former employee $425,000 to keep quiet about claims of a homosexual tryst. Crouch denied having sexual contact with the employee.

While many Christians lack the discernment (or interest) to confront TBN over its teachings and practices, the secular press has not nearly been as restrained in dealing with the network and its histrionic owners.

Crouch is survived by his wife; two sons, Paul Jr. and Matthew, and their children.

The Trouble with TBN: Amid a flurry of scandalous accusations, ministries again face the question of whether to abandon or reform the broadcaster.

Ever since the 18th century, nativity scenes in Catalonia, one of Spain’s autonomous communities, has included a odd figurine referred to in Spanish as “El Caganer” — which literally means “the crapper” or “the shitter”.

Sure enough, these statuettes depict bare-bottomed celebrities and other iconic figures in the act of defecation.

The exact origin of the Caganer tradition is lost, but this Wikipedia entry lists more than a dozen possible explanations.

Here’s what the Catalan News Agency has to say on the subject (in a report from 2010):

By the way, Caganers are also found in other Spanish communities, as well as in southern France, Portugal and Italy.

The tradition is tolerated by the Catholic Church. 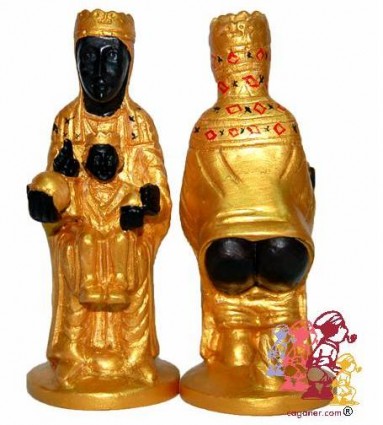 But this year some believers have been outraged by the introduction of one of the newest Caganer subjects: the Virgin of Montserrat, a black statue of the Virgin Mary and infant Christ.

Popularly known as “La Morenita” (The Little Dark One), it is one of Catalonia’s emblematic religious icons. She joins such figures as Elvis, Sponge Bob, Pope Francis (another of this year’s new inductees), Barack Obama, and several players of FC Barcelona.

A Roman Catholic association, “e-Cristianos”, says it plans to sue the manufacturer of the Virgin figurine for “attacking the respect and dignity of religious symbols.”

We’ll say it for you: Party poopers!

Then again, a poll running in Spanish newspaper La Vanguardia asking, “Is it okay to convert the Virgin of Montserrat into a ‘caganera’?” currently shows a majority of readers answering, “no.”

Meanwhile, we cannot find the Virgin of Montserrat figurine — of which only 250 were produced — on Caganer.com, but Pope Francis is listed as one of this year’s best sellers.

Parents in Israel are upset that ads for the Scientology cult are appearing on the Hebrew-language version of the children’s game website Webkinz.

The Hebrew-language advertisements, which were place on the website via Google’s Adwords service, reads “Get to know yourself. Get to know life. Visit our website. The Israeli Center of Scientology.”

According to Israel Hayom the Scientology Center in Israel says it has no control over where Google places its ads, and a spokesman for Scientology pointed out that the ‘church’ does not actively target children.

The newspaper notes that former members of the sect claim Scientology uses methods based on fraud and brainwashing, and that complaints against the organization include claims that Scientology practices illegal hypnosis, and exploits and harasses its followers.

Really, all you need to know about Scientology is how the cult destroys families and friendships:

I Will Get My Kids Back! Just ordered this custom car magnet! #mycarmagnet #scientology #disconnection pic.twitter.com/05lNAXRHF6

Lori tells your story here, and you can learn more about Scientology’s destructive ‘Disconnection’ policy here.

Now you understand why parents don’t want their kids to be exposed to Scientology propaganda.

Religion News With A Difference

Religion News Blog brings you religion news with a difference — an inside perspective that allows us to highlight nuances often missed by other media outlets.


Others prefer to hear from us via email.

And yet others hang out with us on Google+.