You are here: Home | Catholic Church | I can raise the dead, prophet says, as police haul away corpse

Self-proclaimed prophet Rector Ndlovu, 53, claims that he can raise the dead. Unfortunately, he has not yet been able to present any proof of his abilities.

Worse, last Wednesday he was arrested — along with four of his fellow believers — inside a shack where police also found the corpse of Isac Tance.

Also inside: Scientology; Hana Williams; Catholic Church vs. the Mafia; Fake ‘Christian’ weddings; plus: Christians and tattoos; Also: Comment on these stories;

We’ll spare you the details. Suffice it to say that Tance was very death — and had been so for at least three months.

Ndlovu and his followers, including Tance’s wife, have been charged with concealing a death. But in court they insist that Tance is merely sleeping, and that they have been praying for his resurrection.

On its own, that’s a pretty weird story. But a little background may help.

The believers, all from Zimbabwe, are adherents of the Johane Masowe Apostolic Faith, a religious sect founded by the late Johane Masowe — who claimed he was another ‘John the Baptist.’ 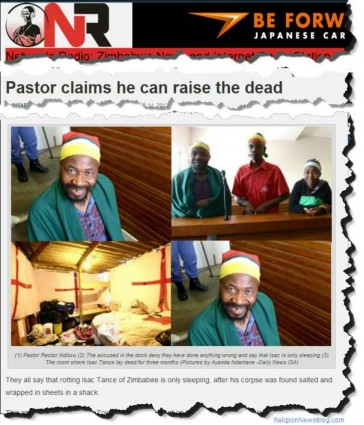 The sect’s members are known as Vapostori, which means ‘apostles’ in the Shona language.

They say they are Christians, but are not always accepted as such by Zimbabwe’s mainstream churches as they also incorporate many traditional beliefs and practices which aren’t always compatible with Biblical Christianity.

For instance, they are notorious for their rejection of any form of medicine, which has resulted in the death of many of the sect’s followers.

Masowe initially rejected the Bible, along with the ‘white Christianity‘ which missionaries brought to Africa, because he considered it too academic. He believed in direct revelation from God, and felt that having a Bible in book form instead implied the need for European-type education and money in order to know what God wants.

And he especially objected to the fact that most white missionaries tended to discount the possibility of miracles even though they occurred in the Bibles they taught from.

When Johane later did accept the Bible, he still preferred to do what people in the Bible did rather than only read about it: including supernatural faith healings, prophetic utterances, and exorcisms.

Still a weird story, but now at least with a modicum of explanatory context.

Anyone researching the Scientology cult will run into Jon Atack — sooner, rather than later.

Author and teacher Skip Press, who knows as much about the inner workings of celebrity Scientology as anyone alive, is one of countless people who today can talk about Atack as The Man Who Got Me Out of Scientology.

At the start of this month, the adoptive parents of Hana Williams were sentenced to decades in prison.

Last month Larry and Carri Williams were both convicted on charges of starving and beating their 13-year-old adopted daughter — forcing her outside where she died in the cold.

While prosecutors insisted issues of faith were not a factor in this case, many have pointed out that once again the controversial parenting book “To Train Up a Child” played a role.

In another abuse case, a prosecutor called it “truly an evil book.” But, as Slate points out, in this case the book was just the beginning.

The magazine has posted an indepth story about Hana Williams’ tragic fate — and how it could happen again.

Just so you know, if you don’t care about the environment, the Catholic Church will get you: last week Cardinal Crescenzio Sepe, the archbishop of Naples told reporters that people who pollute the environment are “not in the grace of God” and cannot receive Catholic communion.

So, do mafia types really care about communion?

“It’s like going to Disneyland.” That’s what one ‘fake minister’ says about a trend in which Japanese couples insist on having Christian-like weddings — even though only 1 percent of Japan’s population identifies as Christian.

Does the Bible forbid Christians from having tattoos?

Yes: “Do not cut your bodies for the dead or put tattoo marks on yourselves” — Leviticus 19:28.

But, says inked-up Pastor Tommy Bongers, that Old Testament Bible verse does not rule out tattoos and needs to be read in context.

You can view his entire sermon here.