You are here: Home | children in cults | Scientologists almost ready to ‘build a new world’; Actors in cults

Michelle Pfeiffer (Dangerous Liaisons, Batman Returns) has revealed that she was once part of a cult after becoming involved with a “very controlling” couple who believed in breatharianism — the alleged ability to live without food and water. 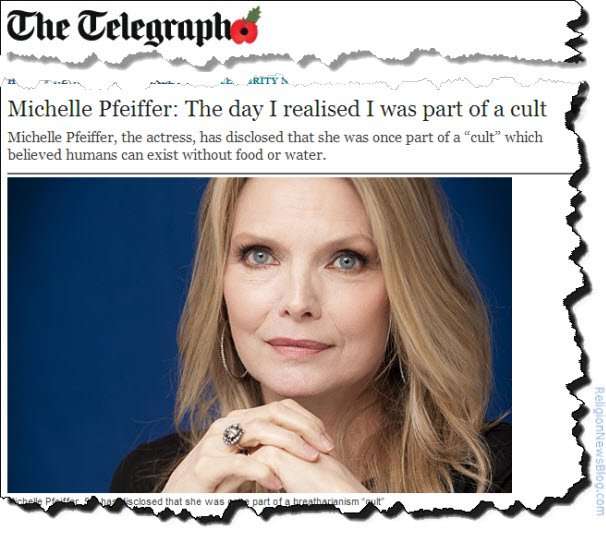 Meeting her first husband, Peter Horton, saved her. Horton had been cast in a movie about the Moonies — as followers of the late Sun Myung Moon used to refer to themselves. While helping Horton research that cult she realize she was in one herself.

“We were talking with an ex-Moonie and he was describing the psychological manipulation and I just clicked,” she said in an interview for The Sunday Telegraph’s Stella magazine.

Scientists understandable file Breatharianism under the heading of pseudoscience, pointing out that several people who practiced it died from starvation.

One proponent is Jasmuheen, an Australian woman who claims her DNA changed so that she can live on hydrogen. When Australia’s version of 60 minutes challenged her to live under surveillance they ended the test a few days when a doctor warned that Jasmuheen’s health was collapsing. She blamed pollution from a nearby highway.

She also turned down a $30,000 offer from Australian Skeptics if she could prove her DNA claims, saying she could not see the relevance.

Zimbio has a slideshow of actors and actresses who were once involved with cults.

Speaking about actors and actresses in cults:

The Church of Scientology — the destructive cult that actively courts celebrities — is gearing up to — finally — open its ‘Super Power’ building in Clearwater, Florida.

It is designed to deliver what Scientologists refer to as the ‘Super Power Rundown‘ — a high-level training course intended to teach the cult’s followers to use all of their 57 “perceptics” or senses. 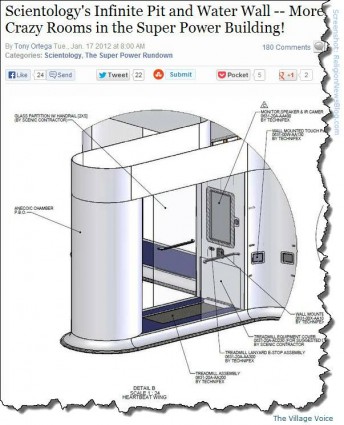 Inside Scientology’s Super Power Building
If you do not quite get the terminology, don’t worry. It’s all based on the gobbledygook of Scientology’s founder, L. Ron Hubbard who, in creating his fantasy religion, came up with the idea that a “rundown” is “a series of steps which are auditing actions and processes designed to handle a specific aspect of a case and which have a known end phenomena.”

Are we losing you? Hubbard explains: “This means that puts Scientologists into a new realm of ability enabling them to create a new world.”

Yes, Scientologists believe they are working toward creating a new world.

Sounds like a good time to point to our research resources on the subject of brainwashing.

Meanwhile, Scientologists — most of whom don’t stand a chance to complete the course — may want to take a look at what their money buys the cult.

And yes, the building comes complete with a token ‘chapel’ — used primarily to pull the wool over the eyes of those who like to think of this destructive organization as a ‘religion.’

The other shoe has finally dropped for jailed cult leader Tony Alamo. A federal judge has ordered the U.S. Marshal service to sell some of Alamo’s properties in order to satisfy judgments against him on behalf of two of his former victims.

Alamo had ordered his enforcer, the late John Kolbeck, to beat up Spencer Ondrisek and Seth Calagna.

The two men — who were also starved, denied education, and forced to work without pay — successfully sued Alamo, who subsequently tried his best to convince authorities that his properties did not belong to him.

Though he is serving a 175-year prison sentence, Alamo appears to still very much in control of his ‘ministry.’

Just like Tony Alamo, cult leader Warren Jeffs — who is serving life in prison — has continued to rule his followers with an iron fist.

The Salt Lake Tribune reports on a lawsuit that alleges the Fundamentalist Church of Jesus Christ of Latter-Day Saints (FLDS) essentially runs the twin towns of Colorado City, Ariz., and Hildale, Utah., not the elected leaders, not the civil authorities and not all that subtly.

If true, it means the separation of church and state — a constitutional bedrock of pluralistic America — is nonexistent, replaced by an iron-fisted theocracy in which Jeffs’ edicts are enforced above the law.

And the paper says that hundreds of photos, found on a flash drive someone lost, show the extend of the intense surveillance the FLDS carries out on current and former members, as well as on outsiders.

Jeffs was sent to prison for sexually assaulting two underage followers he took as brides in what his cult viewed as “spiritual marriages.”

The Child-Friendly Faith Project (CFFP) has a November 8 conference in Austin, Texas, to address child abuse that occurs in faith communities:

How do we best handle cases of child abuse and neglect when they occur in faith communities and cultural groups?

Do some faith practices or cultural traditions cross a line into abuse?

Attendees will hear from some of the country’s most renowned experts in faith, child advocacy, and the law, including:

If you cannot attend you can follow the conference via a live feed ($20).

CFFP President Janet Heimlich is an award-winning journalist and the author of Breaking Their Will: Shedding Light on Religious Child Maltreatment