Private Investigator David Sullivan, who specialized in rescuing people out of cults, died October 11 in his San Francisco home at the age of 62, following a recurrence of cancer.

Initially his agency worked on civil investigations related to undue influence and clergy and therapistÂ abuse. But after after meeting Dr. Margaret Singer, a clinical psychologist who was an expert on brainwashing and mind control, Sullivan started focusing on helping people get their loved-ones out of cults — which he did by joining the cults himself, sometimes at great personal risk.

The November 2013 issue of Harper features a cover story about David Sullivan
Nathaniel Rich, author of “The Man Who Saves You from Yourself” — a November 2013 Harper’s magazine cover feature on Sullivan — says that David had a “deeply spiritual quality to him.” He emphathized with cult victims because he himself sought, in Saul Bellow’s phrase, “knowledge of the higher worlds.”

Rich says that long after Sullivan succeeded in getting someone out of a cult, “he would continue to pursue the organization and its leader, often for years, on his own dime.”

According to the San Francisco Chronicle writer Joshua Jelly-Shapiro was working with Sullivan on hisÂ memoir.

Jelly-Shapiro told the paper that David was “ready to tell tales on the groups he had penetrated, the big and dangerous ones” such as Scientology and the Unification Church. 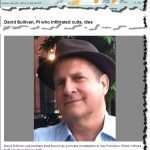 “He just really loathed the way these groups and people manipulated people and ruined lives,” heÂ said, noting that Sullivan — who “had a deep sense of the importance of free will” — thought the people behind these cults were “charlatans.”

Listen to Investigating Cults, a July 2010 talk David Sullivan gave at the Commonwealth Club of California on the process of identifying and investigating cults, providing an overview of how cults recruit, convert and maintain control of their members through a variety of psychologically coercive techniques.

How to find good cult experts, avoiding the bad apples.