Imprisoned cult leader Tony Alamo and his wife will have to reveal where the money they use to pay their lawyers comes from.

Alamo was sentenced in November, 2009, to 175 years in prison on charges that included taking girls as young as 9 years old across state lines to become his “brides.”

Two other former members of his ‘ministry,’ Seth Calagna and Spencer Ondirsek, successfully sued Alamo for ordering his enforcer, John Erwin Kolbeck, to beat them. 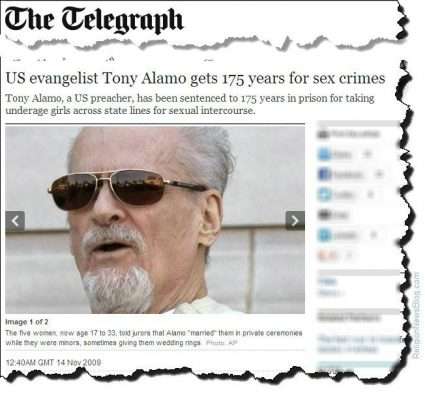 In November, 2009, cult leader Tony Alamo was sentenced to 175 years in prison
But the cult leader, who appears to continue being in control of his Tony Alamo Christian Ministries, has thus far been able to avoid paying up.

Federal prosecutors and attorneys are therefore seeking the seizure of some of Alamo’s properties in order to help satisfy the judgements.

But Alamo and his followers are playing games, claiming that the properties are owned collectively by church members, and not by Alamo.

Earlier this year U.S. Magistrate Judge Barry Bryant ruled that Tony Alamo is the true owner of the properties, even though several of them were placed in the names of ministry members.

Last month Bryant threw out most claims of ownership in the properties by Alamo’s followers.

The Magistrate has now ruled that arrangements for attorney fees are not protected by the attorney-client privilege and must be revealed.

The Southern Poverty Law Center, a human rights organization that tracks hate groups and their activities, lists Alamo’s organization as a hate group due to its ongoing hate campaigns against Catholics.

Tony Alamo Christian Ministries, is widely considered to be a cult both sociologically and theologically.1

Theologically it is a cult of Christianity due to its many un-biblical teachings and practices. As such it is not representative of, nor part of the Christian church.

Sociologically, the organization is a cult that has engaged in violence and other illegal acts against its followers.