ReligionNewsBlog.com — Holy water — which is plain water that has been blessed by a religious leader — is used in various religions for anything from baptism and spiritual cleansing to warding off evil.

But it may also be very bad for you.

Researchers at the Institute of Hygiene and Applied Immunology at the Medical University of Vienna tested the holy water from various sources in Austria.

They found that 86 percent of the water from 21 holy springs did not meet the requirements of Austria’s national drinking water regulations.

Not surprisingly, the busier the church, the worst the condition of the water — with samples containing up to 62 million bacteria per milliliter of water.

In their study, published in the Journal of Water and Health, the researchers point out that drinking — or even touching — contaminated water can result in cramping, diarrhea, and fever.

In 2009 Italian inventor Luciano Marabese (misspelled in this video as Marabrese), a Catholic, invented a hygienic holy water dispenser that works with an infrared sensor:

Philip Berg, founder of the controversial Kabbalah Centre, has died at the age of 84 (86, according to the centre).

Born as Feivel Gruberger, he was a former Brooklyn insurance salesman. He changed his name in 1969, and presented himself as the messianic head of the Kabbalah movement — an ancient form of Jewish mysticism.

His Kabbalah Centre’ unortodox interpretation of Kabbalah, gained prominence when Madonna credited it with “creative guidance” on her 1998 album, Ray Of Light.

The Daily Mail in 2004 said that Berg ditched his family in order to milk millions from gullible disciples. 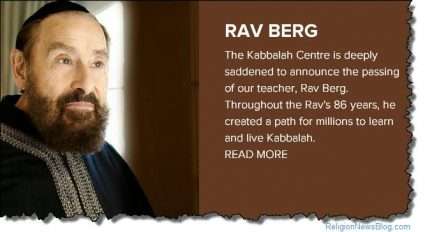 Screenshot, Kabbalah Centre website
At the time the paper wrote that there are claims the Kabbalah Centre — which has assets believed to be in the hundreds of millions of dollars — “is a dangerous cult whose converts are brainwashed into handing over their earnings to fund the opulent existence of Berg and his family.” [See: How Madonna’s sect snared my daughter]

Years later, in 2011, the IRS started an investigation into the centre’s financial dealings.

The status of that investigation is not known.

Pastor on trial for securities fraud

Jurors have been selected for the trial of Harris Himes, a Montana pastor, charged with securities fraud.

Himes, who has pleaded not guilty, was charged with felony theft, fraud and conspiracy to commit fraud two years ago after allegations that he and another pastor bilked a church member out of $150,000 in 2008.

Parishioners at a church service in England were attacked last Sunday by a bunch of nuts claiming to be “international law enforcers”.

They are members of what they call the International Tribunal into Crimes of Church and State, which is headed by defrocked United Church of Canada minister Kevin Annett.

The group says it established a court last year in which they tried Pope Benedict XVI in absentia.

He was found guilty of crimes against humanity, and the court sentenced him to 25 years in prison, along with seizure of his assets — apparently including the Catholic church in Foleshill, Conventry.

Oh, the same group of lunatics also found the British Queen and the Canadian prime minister guilty of similar crimes, and the court has ordered that they be arrested.

The group actually filmed its shenanigans in Conventry, and posted the video to YouTube:

The documents provides insight into al Qaeda’s current strategy, as well as the nature of its global ambitions.

The hate group’s main aim remains the weakening of the United States and Israel, but the documents also emphasizes the need for “dawa” — missionary work on behalf of al Queda’s ideas.

Did you know that Islam knows a ‘greater’ and a ‘lesser’ jihad?