ReligionNewsBlog.com — Authorities in Albany, Oregon on Thursday arrested a couple on charges of first-and second-degree manslaughter in the death of their 12-year-old daughter.

Syble Rossiter, the daughter of Travis and Wenona Rossiter, died at the couple’s home from complications related to type 1 diabetes, after her parents withheld treatment in favor of prayer.

The Rossiters belong to the Church of the First Born, which embraces faith healing.

The couple were arraigned on Friday afternoon. They pleaded not guilty through defense attorney Paul Kuebrich.

At the arraignment, the judge lowered their bail to $10,000 each, and the couple were released from jail on Friday night.

The Albanay Democrat-Herald reports, that “according to the conditions of their security, they can have no contact with their three minor children, except as allowed by the Oregon Department of Human Services.”

General Assemblies and Church of the First Born

The church, near Brownsville, Oregon, is part of the General Assemblies and Church of the First Born — a small Pentecostal ‘denomination’ of sorts. The movement, which does not have head quarters or paid clergy, consists of a network of more than 100 independent, loosely affiliated churches in 20 US states.

Its teachings regarding faith healing are extreme and unbiblical. They have led to unnecessary deaths, which have resulted in a number of criminal prosecutions.

Church officials have sometimes told the press that members are free to seek medical aid, but former members say that those who do so are considered ‘weak in faith’ or have sinned against God by demonstrating a lack of faith, and are therefore shunned.

Critics familiar with the church say that some members have been known to call a vet for a sick animal, while eschewing proper medical care for sick family members.

The church’s website includes a downloadable form encouraging parents to notify authorities if they have a sick child. 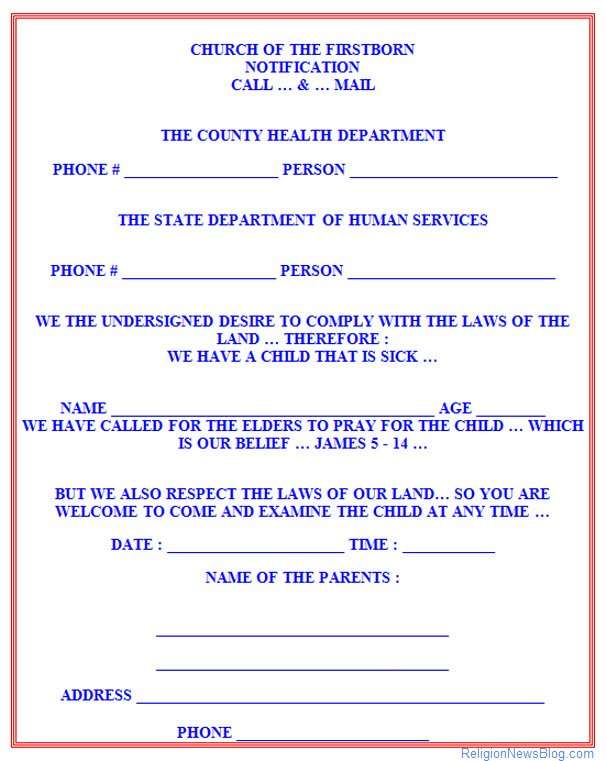 A downloadable WORD file on the Church of the First Born’s website encourages parents to call authorities (note: not medical professionals) if they have a sick child.

Since 1976, at least 82 children linked to the Church of the First Born have died from a lack of medical treatment, says Child Healthcare is a Legal Duty — an organization that lobbies against state laws that protect parents who choose faith healing over modern medicine.

Largely in response to a series of preventable ‘faith-healing’ deaths at a similar denomination, Followers of Christ Church, the Oregon legislature changed the law regarding faith healing.

House Bill 2721, which went into law June 9, 2011, eliminates reliance on spiritual treatment as defense to certain crimes in which the victim is under 18 years of age. Effectively it means a reliance on faith healing can no longer be used as a defense against manslaughter charges.

Recent Cases Involving the Church of the First Born

In September, 2012, Brandi and Russel Bellew pleaded guilty to criminally negligent homicide charges and were sentenced to five years probation after reaching a plea deal with prosecutors in the preventable death of the 16-year-old son.

In February that year two parents were charged with second-degree murder in the faith healing death of their 17-year-old son, Zachary Swezey.

In May JaLea and Greg Swezey were acquitted on the murder charges, but were told they could still face retrial for manslaughter. In June, 2012, they agreed to accept a plea deal that spared them jail time but holds them responsible for their teenage son’s death after they failed to call a doctor.