Villagers in Papua New Guinea have killed fugitive cult leader Steven Tari — who referred to himself as ‘Black Jesus’ — and one of his followers, after they were caught attacking a young woman.

Tari was accused of human sacrifices, rape, murder and cannibalism, but was ultimately convicted in October 2010 of raping 4 young girls who belonged to his cargo cult.

Sentenced to up to 10 years in prison, he escaped last March along with 48 other prisoners.

Tari claimed to be King Yali, a reincarnation of God Yali, the deceased leader of the Yali Movement. A failed Lutheran pastor, he also said he was the Messiah. 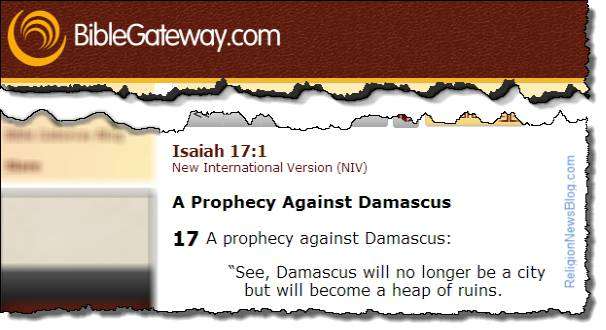 Some evangelicals — which a TIME magazine article equates with ‘fundamentalist Christians‘ — apparently view the escalating violence in Syria as leading up to the fulfillment of a prophecy in the Biblical book of Isaiah which, in Chapter 17:1, says, “A prophecy against Damascus:

“See, Damascus will no longer be a city but will become a heap of ruins.”

According to TIME “nearly all Biblical scholars … argue that such a literalist interpretation of the text is highly problematic.” The article quotes just one scholar, who opines that the interpretation of Isaiah 17 as a reference to the current conflict is absurd.

By the way, Evangelicals actually come in many flavors, since Evangelicalism is a rather diverse movement. And many, if not most, of them pay no attention to the kind of blogs the article cites — precisely because most of those blogs are, well, absurd.

Bob Larson is an ‘evangelist’ and — reportedly using mail order credentials — ‘reverend’ who markets himself as “the world’s foremost expert on cults, the occult, and supernatural phenomena.”

It’s a ridiculous claim that few, if any, true cult experts and Christian apologists support.

But he is good at marketing his business — most recently via the use of his team of “Teenage Exorcists.”

On September 12, BBC Three will air The Teenage Exorcists, a documentary by Filmmaker Dan Murdock.

unpicks the intensely theatrical nature of exorcism alongside delving into the personal lives of the three girls; an exploration which leads to a fascinating final question — are these girls truly miracle-workers or simply shameless frauds?

Bonus note: Via his Twitter stream I found out Murdoch also plays in a band called The Lazlo Device. Wow! Good stuff.

The doctrines of the Watch Tower Bible and Tract Society of Pennsylvania — the legal entity behind Jehovah’s Witnesses are changing again.

Just like the Mormon Church 1, another major cult of Christianity, ‘the Society’ — as members often refer to the organization — changes its doctrines pretty much at will.

The group has a so-called Governing Body which, among other things, is responsible for formulating policy and doctrines.

This Governing Body has used the parable of the faithful and discreet slave — in Matthew 24:45-47 2 — to justify the notion that they have been appointed by God to lead his people.

Well, this doctrine, of the Faithful and Discreet Slave, has undergone many interpretations and changes over the years.

And it is about the change again — drastically — as reflected in the articles discussed in the July 15, 2013 Study Edition of the organization’s Watchtower magazine.