Are you devoted to your iPhone? No wonder. In How Steve Jobs Turned Technology — And Apple — Into Religion, WIRED says: 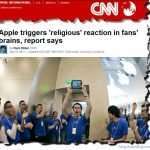 Jobs’ Zen master Kobun Chino told him that he “could keep in touch with his spiritual side while running a business.” So in true Zen fashion, Jobs avoided thinking of technology and spirituality in dualistic terms. But what really set him apart was his ability to educate the public about personal computing in both practical and mythic ways.

The iconography of the Apple computer company, the advertisements, and the device screens of the Macintosh, iPod, iPhone, and iPad are visual expressions of Jobs’ imaginative marriage of spiritual science and modern technology.

In October 2012 a judge in the Dominican Republic jailed Peter Brunck — the German leader of a doomsday sect that believes in aliens.

In a raid on the “Academy for Future Health” — during which one cult member was shot and killed — police found an arsenal of assault rifles and other military gear.

But they also found something else: RD$60 million (US$1.4 million) in cash, as well as jewelry. And that money has gone missing.

The country’s National Police has now charged 14 agents and officers with theft.

Pastor Rodney Wills, of the Mt. Salem Baptist Church in North Caroline, has been fired from his job — for attending a Rick Ross concert.

“We cannot have our leader supporting people of this world who are tearing down the kingdom of God.” said Deacon Miles Langley — one of 14 deacons who voted 11 to 3 for Wills’ dismissal.

Narconon uses a treatment philosophy based on the fantasies of Scientology cult founder L. Ron Hubbard, a man who had great trouble telling truth and fiction apart.

His writings on medicines, psychiatry and medical conditions basically amount to quackery.

A number of people have died at various Narconon facilities, and — like the Scientology cult itself — the organization has run into trouble in various countries and U.S. States.

The Economist has published a review of Christians, Muslims and Jesus. By Mona Siddiqui. Yale University Press; 285 pages [Amazon.com] [Amazon.co.uk]

The most compelling passages are the personal ones, in which the author sets out some of her own dilemmas. A Muslim, she describes herself as fascinated by Christianity. But she remains committed to an Islamic belief in a God who is utterly transcendent and so could not have taken human form, as Christians say of Jesus.

Do Muslims, Jews and Christians worship the same God?

Former Victoria’s Secret model Kylie Bisutti, who in December 20111 gave up her career because she could no longer reconcile her career with her Christian beliefs, has launched God Inspired Fashion.

It’s a Christian fashion line that, according to the website, can “Help put God’s word back in schools.”

Bisutti shares the story of how she went from lingerie model to role model in her book, I’m No Angel.

Meanwhile, fashion model Kate Upton tells Elle magazine why she has a tiny tattoo of a cross on the inside of one of her fingers:

“I was at a photo shoot and I was wearing a cross necklace that my mom bought me, and somebody made a joke like, ‘Why are you wearing a cross? Like you would be religious.’ And then they took [my necklace] away. I was really affected by that. The whole thing made me realize that I do want [a cross] with me, at all times.”

The seaside resort of Aberystwyth, Wales, has lost out on over Â£100,000 from Jewish tourists, who have gone elsewhere after a health and safety ban on lit candles came into effect.

Lighting candles is part of the weekly Shabbat tradition in the Jewish religion.

This somewhat annoying (because it comes across as, well, fake) video explains the candle lighting ritual:

“(Evangelist) Jimmy Swaggart called it €˜the work of the devil.’ Because of its basis in Eastern religions, fundamentalists considered it satanic. Now those same fundamentalists are embracing it,” Moor says.

But just like yoga — which also is rooted in religion — meditating has gone mainstream.

The Minneapolis Star Tribune says “the practice is being embraced by an audience that isn’t interested in its religious contexts, but is fascinated by its mechanics and techniques”

A member of the Old Order Amish with no medical degree to back him, faith healer Solomon Wickey attracted a worldwide following out of his rural Georgia clinic.

“God does the healing,” he told The Journal Gazette last year. “If it wouldn’t be for Jesus Christ, we couldn’t heal nothing.”

According to the book description for Solomon’s Touch: The life and work of Solomon J. Wickey, “Wickey was sent to deliver the most profound message of all; tap into God’s power to heal by sending a coded signal to the body via silent thought.”

Whenever the Watchtower — the legal entity behind a worldwide legion of Jehovah’s Witnesses — claims to have received “new light” its followers believe the new information builds upon what was taught previously.

But as in Mormonism, another cult of Christianity, the teachings of the Watchtower keep changing.

Christian missionary Keith Walker discusses the most recent changes in an exchange with a Jehovah’s Witness elder.

Sign up to get our free news alerts sent to your email address!