However, the cops at the LAPD say the report is “unfounded.”

Shelly Miscavige has not been seen in public since 2006, and critics of the space alien cult aren’t quite buying the line that she is simply working hard for the ‘church.’

They point out that the cult runs its own concentration camps where people are subjected to, among other things, brainwashing.

Scientology hotshots call the claim that Shelly Miscavige is missing is “publicity stunt cooked up by a small band of unemployed fanatics who live on the fringe of the Internet.” 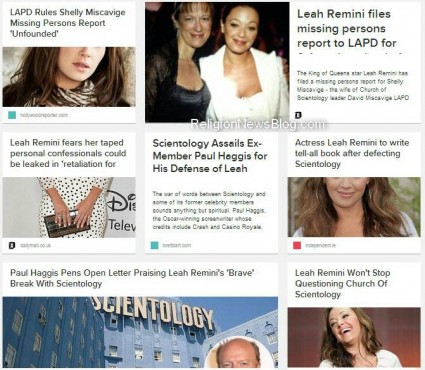 Some of the media stories about actress Leah Remini vs the ‘Church’ of Scientology
Remini last month left the Church of Scientology — after being a member for over 30 years — reportedly over her concerns regarding the cult’s ‘Disconnection’ policy, which destroys friendships and family ties.

Stating that “[N]o one is going to tell me who I can, and cannot, talk to,” she has promised to keep speaking out.

She says will write a tell-all book, even though she is aware of the fact that the destructive movement could release her recorded, personal confessions “in retaliation.”

Why Scientology caters to the rich and famous