Syndicated Christian talk show host Janet Mefferd mentions this incident in the introduction to her discussion with Paul Carden, Exercutive Director of The Centers For Apologetics Research, regarding the prosperity gospel — one of the many false teachings of the so-called ‘Word-Faith’ or ‘Word of Faith’ movement.

Note that the Sow a financial donation seed in order to reap a financial blessing trick doesn’t quite seem to work for Benny Hinn himself.

Speaking of Hinn: he was heckled as the “world’s greatest scammer” as he and 5 bodyguards walked through Los Angeles International Airport last friday.

I’m not sure that it wasn’t a set-up, though. But think about this: if Benny Hinn’s claims regarding financial blessings as the result of donations were true, he’d be sending you money.

Of special note is the section on Freedom of Expression, which includes the statement that “the right to freedom of religion or belief, as enshrined in relevant international standards, does not include the right to have a religion or a belief that is free from criticism or ridicule.”

Remember the outrageous reactions to the infamous Muhammad cartoons?

Talking about criticizing a religion…

In October, 2011, the top leadership of the Seventh-day Adventist Church (SDA) endorsed a plan to evangelize more than 650 of the world’s major cities, beginning in 2013 with New York City. 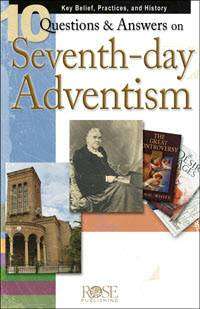 This 14-page overview gives side-by-side comparisons of the most important issues – and the beliefs that every SDA member holds.
Among the organization’s recruitment efforts is the Choose a Full Life campaign, which is an effort to proselytize via the SDA’s so-called “Health Message” — referred to by the SDA as “the right arm of the gospel.”

Christians are actively targeted by the church’s slick campaigns. Why? Well, in the eyes of Seventh-day Adventists — who worship on Saturday — the Roman Catholic Church is “Babylon,” and Protestant Christians who worship on Sunday are the apostate “daughters of the whore of Babylon.”

In fact, Adventist Church founder Ellen White believed that those who worship on Sunday have been deceived by Satan, and therefore bear the “mark of the beast.”

It gets worse. As noted in 10 Questions and Answers on Seventh-day Adventism, White predicted a “Time of Trouble” when international law will mandate “Sunday worship” and make Sabbath-keeping a crime. The Sunday-worshippers will then get permission to hunt and kill Sabbath-keepers.

Nevertheless, the Seventh-day Adventist Church goes to great lengths to try and be accepted as just another Christian denomination — which it clearly is not.

As we demonstrate here, theologically, it is a cult of Christianity — a movement that falls outside the boundaries of the Christian faith.

Douglas Wilson, the Senior Minister of Christ Church in Moscow, Idaho, weighs in on the ‘age old’ and on-going debate regarding the proper classification of religions, sects and cults — using Mormonism as a test case.

He’d like for us to regard the category “cult” as a sociological reality, not a theological one.

That’s a common mistake, based in large part on the general confusion surrounding the term. Cult Definition provides some insight — also using the Mormon Church as an example.

Those fires in Colorado? You guessed it: Caused by gays. (And no, that link doesn’t lead to yet another article about those Westboro weirdos). (And yes, these folks are as nutty…).

Britain’s Channel 4 is going to air the Muslim call to prayer live every morning during the month of Ramadan.

The station calls it an act of “deliberate provocation” aimed at viewers who might associate Islam with extremism. No, really?

And provoke it does.

Meanwhile, the The European Parliament on Tuesday lifted immunity for French National Front leader Marine Le Pen, opening the way for her to face charges for likening the sight of Muslims praying in the street to Nazi occupation during World War II.

Yoga is a religious practice. But not the way that it is taught by the Encinitas Union School District at its nine campuses, San Diego Superior Court Judge John S. Meyer has ruled.

Some parents claimed the school district was promoting Eastern religion, but according to the judge

the opponents of the yoga class were relying on information culled from the Internet and other unreliable sources.

“It’s almost like a trial by Wikipedia, which isn’t what this court does,” Meyer said.

In their lawsuit against the school district, parents noted that Harvard-educated religious studies professor Candy Gunther Brown found the district’s program is pervasively religious, having its roots in Hindu, Buddhist, Taoist and metaphysical beliefs and practices.

The argument that yoga can be divorced from its religious roots is also used by some Christians who claim to teach a Christian- or Christian-friendly version of yoga.

You can get free Religion News Blog updates by email. You know you want to.